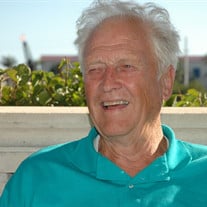 Vince Christensen passed away peacefully, surrounded by his family in his Naples, Florida home, on February 6, 2022. Winfred Vincent Christensen was born on April 29, 1922, in Hendricks, Minnesota. He was the ninth and youngest child of Reverend Olaf and Juditha Christensen. The family moved to Wilmar, Minnesota in 1923 and to Northfield, Minnesota in 1932. Vince graduated from Northfield High School and attended St. Olaf College, where he met his wife, Lois Rolland, and they married in 1944. He served in the US Navy during WWII, from 1943-1946, primarily aboard the munitions ship USS Rankin, in the Pacific. Vince was employed as an insurance agent with Lincoln National Life Insurance Company for many years, and he and Lois purchased Pineview Residence in 1959, a nursing home in St. Paul, Minnesota, and they proudly toiled to manage the business and provide loving care to numerous clients for over 20 years. Vince retired in 1984, and they loved being "snowbirds", spending the winters at their home in Naples, Florida and summers in Minnesota. Vince was a devoted husband and father. He particularly enjoyed spending time at the beloved family cabin on Lake Carlos in Alexandria, Minnesota. Vince and his family enjoyed all types of water sports together at the cabin and spent many joy-filled hours playing competitive card games at both of their homes over the years! Lois passed away in 2002, and Vince married Evelyn Nunn a few years later. Vince enjoyed Evelyn's companionship for many years, while living on Lake Carlos and in Naples. As were many of the Christensen offspring, Vince was tall and handsome and had a charming, engaging personality. His sense of humor was made known to every person he met; he made everyone around him smile. He loved to sing, and generously shared his beautiful tenor voice. Vince's optimism and steadfast Norwegian character served him well in living life his way, for almost 100 years. Throughout the course of his life, Vince was known and acknowledged to be a truly honorable man. Vince is survived by his wife, Evelyn and 4 children; Barbara Zander (Carl), Joanne Christensen, Jeffrey Christensen, and Jill Porter (Timothy Quarberg), 13 grandchildren, and 19 great-grandchildren. A memorial service will be held at 1:00 PM on Saturday, April 30th, 2022, at Washburn-McReavy Nokomis Park Chapel, 1838 E. Minnehaha Parkway, Minneapolis, Minnesota. A visitation will be held from 12:00 until time of service. Family Interment will occur on Friday, April 29th, what would have been his 100th birthday, at Fort Snelling Cemetery. In lieu of flowers, the family is requesting that donations be made to St. Jude Children's Research Hospital.

Vince Christensen passed away peacefully, surrounded by his family in his Naples, Florida home, on February 6, 2022. Winfred Vincent Christensen was born on April 29, 1922, in Hendricks, Minnesota. He was the ninth and youngest child of Reverend... View Obituary & Service Information

The family of Vince Christensen created this Life Tributes page to make it easy to share your memories.

Vince Christensen passed away peacefully, surrounded by his family...

Send flowers to the Christensen family.