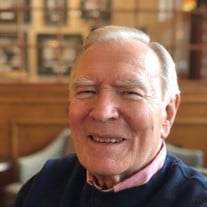 William J. Rikkers, Age 88, passed away on January 28, 2022, of complications related to Parkinson's Disease. Bill was a storyteller to the end. His memories were brought to life for all of us in his re-telling. His earliest memories were from a time in the 1930's and early 40's, when his family lived on the Navajo Reservation in Shiprock, NM. Those early experiences formed a lasting bond with his siblings and a lifelong love of the Southwest, and he frequently returned for spiritual retreats. Bill graduated from Minnehaha Academy and from the University of Minnesota. During his business career he held positions in finance and accounting with several large Mpls. organizations. He consistently brought an entrepreneurial spirit to his work, and was a respected leader. He also invested in small and medium sized local businesses, and was an owner of Yale, Inc., an HVAC company. Everyday life in the office turned to stories told over and again of friends and colleagues who had touched his life. In the second half of his career, Bill made investments in Colorado mountain property. He and wife Pam fell in love with the beauty and serenity of the mountains. Much of the land was later conserved as open space to be appreciated by future generations. Bill also loved to tell stories about his time in the Navy. He retired as a Commander after 25 years of reserve duty. His love of the Pacific Ocean and the California coast lived on for the remainder of his life. Throughout the years, Bill´s story of his own spiritual journey inspired those who knew him. His faith in a loving and forgiving God filled his final days with grace and hope. More than any occupation, Bill loved his family. His children and grandchildren brought him great joy. He raised 3 children (John, Jeanne, Jim) with his first wife Margery. Later in life he and second wife Pam had an opportunity to adopt their daughter Catherine. He is survived by wife Pamela, children John (Laing), Jeanne, James (Lisa), and Catherine (Oleg), grandchildren Leander, Laura, Maya, Anton, Maria, Pablo, Hannah (Joe), Adam, Sam, Leo, Sofia, and great granddaughters Syiharra and Sasha. Also survived by sister Ruth, many nieces and nephews, and dear friends. Private interment at Lakewood Cemetery, with a memorial service at Westminster Presbyterian Church, in the spring when it is safe to gather. Washburn-McReavy.com Edina Chapel 952-920-3996

William J. Rikkers, Age 88, passed away on January 28, 2022, of complications related to Parkinson's Disease. Bill was a storyteller to the end. His memories were brought to life for all of us in his re-telling. His earliest memories were from... View Obituary & Service Information

The family of William John Rikkers created this Life Tributes page to make it easy to share your memories.

Send flowers to the Rikkers family.