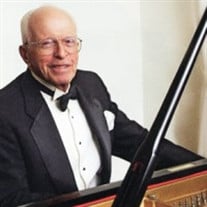 William Arthur Lydell Age 90, passed away on October 18, 2021. Bill was born on March 29, 1931, in Valley City, North Dakota. He graduated from Valley City High School, where he won a trip to NYC from the New York Symphony Society for promising music students. He then attended Valley City State University before serving in the Army during the Korean War from January 1953-December 1954. Following his active service, Bill completed his baccalaureate degrees in Music Education and English and began teaching choir and band at a small-town high school in Hoffman, Minnesota in 1955. There he met his wife, Margret, who was a substitute teacher at the high school, in 1958 and they married that August. They then moved to Michigan, where they taught in Alma before moving to Ann Arbor for Bill's graduate work in music. After receiving his Master of Music in Piano Performance, they moved to Minneapolis, where Bill began a lengthy teaching career at Washburn High School from 1961 to 1984. He grew the music program to include an orchestra, multiple choirs, as well as teaching courses in music theory and English. His Choraliers, Women's Choir, Golliards, Madrigals, and Jazz Singers gave many performances over the years, both at Washburn and throughout the city and region. His choirs were also invited to two European tours. He treasured all those experiences, keeping programs and recordings of both the big trips and the concerts at home. During his teaching career and into his retirement, Bill spent 15 years as a church organist and choir director in Minneapolis. He also served as a frequent clinician and adjudicator for music festivals and contests in the upper Midwest and Arizona for choirs, orchestras, soloists, and small groups; and as a music editor for Schmitt, Hall, and McCreary Publishing. He was also a skillful composer and arranger. Before settling in to his teaching career, Bill had enjoyed performing American standards and jazz with a wide range of professional musicians, including Claude Thornhill, Lawrence Welk, Tony Pastor, and Clark Terry. Bill retired from teaching in 1988, having spent his last three years teaching music to lively elementary school kids. He enjoyed an active retirement, with many volunteer activities, music performances, and travel. He volunteered for many years at Fairview Southdale Hospital and recorded audiobooks for the blind. He enjoyed "going to work" navigating busses and light-rail to play piano multiple days a week at the Minneapolis VA Hospital for staff first things in the morning and for families in the surgical waiting area. As part of the VA's Voluntary Service Program, Bill was recognized for 1,670 hours of service over nine years. He performed many benefit concerts for his alma mater in Valley City, for political candidate fundraisers, and at long-term care homes. He also resumed his solo and band performing career, forming Sweet Jazz in 1994. He thoroughly enjoyed gigging around town, especially when he could include one of his former students in the band. Throughout his life, Bill followed his passions for music and for education, enriching the lives of many. His other passions for comedy and for trains were also lifelong. Growing up in the shadow of the High-Line Bridge and thrilling with rides on the streetcars and El on visits to grandparents in Chicago, he kept up his interest in trains, from cutting a hole through a basement wall for an actual tunnel for model trains to trips with friends to admire steam locomotives. He had a sharp ear for comedy, always loved a joke, oddball poetry (Ogden Nash and non-rhyming limericks were favorites) and knew how to tell a lively story, often with a self-deprecating twist. His rich vocabulary of "NorthDakotaisms" continued to surprise and amuse us Minnesotans. As his vision dimmed due to macular degeneration and he was no longer able to enjoy reading or meandering drives to "pop in" on family and friends, he relied on more frequent phone calls, keeping in touch and expressing his thanks to loved ones in having them in his life. He weathered two heart attacks, the first in 1983; a bypass in 2006; and multiple stents and angioplasties, all with equanimity and determination to get better. As his congestive heart failure, diagnosed in December 2020, worsened over the past months, he was even more filled with gratitude for the life he'd been able to live and all who had made it, as he said, "a good, full life." Bill is preceded in death by his parents, Arthur and Nora; his two sisters and brothers-in-law, Carolyn (Harold) Vandersteeg and Ruth (Calvin) Stevens; sister-in-law Joan (David) Lofgren; brother-in-law Charles (Arlis) Kloos; brother-in-law Dan Kloos; nephews William, John, and Douglas. Bill is survived by his wife of 63 years, Margret; daughter, Lesley; sister-in-law Louise Comfort; brother-in-law Richard (Kathleen) Kloos; Lavonne Kloos (wife of Dan); 3 beloved pups; many cherished nephews and nieces; and many, many students, who he was always happy to hear from and who often grew to be dear friends. Visitation will be at Washburn-McReavy chapel in Edina on Monday, November 29th from 5-8pm (5000 West 50th St., Edina, MN 55436) and at Mt. Olivet Lutheran Church in Minneapolis on Tuesday, November 30th at 11am. (5025 Knox Avenue South, Minneapolis, MN 55419). Remembrances in Bill's honor to: Midwest Animal Rescue & Services https://www.midwestanimalrescue.org/ Jazz88.FM https://www.jazz88.fm/ Washburn High School Foundation, Washburn Arts Council https://washburn.mpls.k12.mn.us/WHS_Foundation are appreciated. Washburn-McReavy Edina Chapel 952-920-3996 Please click this link to view the service: https://player.vimeo.com/video/647956787?h=9cad15414d

William Arthur Lydell Age 90, passed away on October 18, 2021. Bill was born on March 29, 1931, in Valley City, North Dakota. He graduated from Valley City High School, where he won a trip to NYC from the New York Symphony Society for promising... View Obituary & Service Information

The family of William Arthur Lydell created this Life Tributes page to make it easy to share your memories.

Send flowers to the Lydell family.