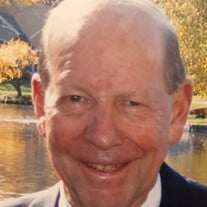 William Brace Horn passed away at the age of 91. William was born in Minneapolis to Charles Lilley and Louise Brace Horn. He is survived by his wife of 67 years, Nancy, daughters Lisa (Michael) Eckert, Julia, (James) Bosland and Susan Stefura, 6 grandchildren and 7 great-grandchildren. Preceded in death by daughter Celia who died in childhood and brother Charles Horn. William graduated from The Blake School in 1948 and from the University of Minnesota with a BA in Economics Magna Cum Laude. He was a member of the Sigma Alpha Epsilon fraternity and inducted into Phi Beta Kappa. He was a cadet in ROTC and commissioned a 2nd lieutenant in the Army. He served 3 ½ years active duty in the Korean War. After he served his commitment in Aberdeen, MD he married Nancy Liebrock in Hinsdale, IL. William and Nancy met at Northern Pine Lodge in Park Rapids, MN as teenagers. They moved to Edina, MN in 1956 and he joined Federal Cartridge Corporation and worked with his father, the founder, Charles Lilley Horn. He became CEO and Chairman of the company and its successor Federal-Hoffman Engineering, Inc. During his career he was Chairman of the Small Arms Division of the American Ordinance Association and served 10 years on the Secretary of Interior Advisory Committee on waterfowl hunting. In 1986 he left the industry to become an officer and trustee of the F.W. Olin Foundation that gave grants for the construction of buildings to private colleges and universities across the United States. He was involved with 37 grants at 30 schools. William enjoyed meeting friends for lunches at the Minneapolis Club, "Twilight Tennis" at the Edina Country Club, tap dancing, bird watching and working on family genealogy. He and Nancy traveled extensively in Europe including 27 times to London where he was an honorary Lord of the manor. He cherished his friends; many he knew since childhood. He was a member of St. Dunstan's Church in St. Louis Park. He was a member of the Korean Veterans of Minnesota and regularly joined others in uniform to march in the Edina 4th of July parade. After 59 years in Edina they moved to Folkestone, a Presbyterian retirement home in Wayzata. Private service and burial. Washburn-McReavy.com Edina Chapel 952-920-3996

William Brace Horn passed away at the age of 91. William was born in Minneapolis to Charles Lilley and Louise Brace Horn. He is survived by his wife of 67 years, Nancy, daughters Lisa (Michael) Eckert, Julia, (James) Bosland and Susan Stefura,... View Obituary & Service Information

The family of William Brace Horn created this Life Tributes page to make it easy to share your memories.

William Brace Horn passed away at the age of 91. William was...

Send flowers to the Horn family.