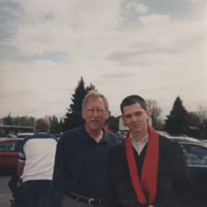 Wayne Thomas Wedan Wayne Thomas Wedan, 74, of Brooklyn Park, MN. Sadly passed away unexpectedly on November 26, 2021 at Abbott Northwestern Hospital in Minneapolis, MN.; resulting from an undiagnosed and metastasized cancer of the liver. He was born in Alexandria, MN. on August 26, 1947 to James Leroy and Sylvia Bernice (née Carlson) Wedan. A lifelong Minnesotan with a proud Swedish heritage, Wayne grew up in and around the Southwestern greater Wayzata and Minnetonka area, moving later to Champlin, and then finally residing onward to Brooklyn Park. After graduating from Excelsior/Minnetonka High School, Wayne enlisted in the United States Air Force at age 19 to serve his country in Vietnam, serving one year overseas stationed in Okinawa and attaining the rank of Sergeant. After 4 years of service he returned home where he went to Barber School, a career he would practice for all the remaining years of his life; working for many area barbershops, including his own for a period of time which was located in downtown Hopkins. He would go on to marry Val Enfield (1984-div.1994), in a union that would produce two children. Wayne was a very loving and supportive father who sought out, encouraged, and enjoyed the company of his children throughout all their time together. Very close to both of his boys until his passing, their relationship was both a devotedly familial and famously fraternal bond that was dear to them all. Its loss will sorely be missed but will also serve as a fondly loving and constant reminder of the gentle, kindly, but also amusing and whimsical nature that endowed Wayne's warm and humorous spirit, through-and-through. These traits are perhaps best exemplified by two of his abiding yet contrary interests: Jazz music and Professional Wrestling! Here an appreciation for the arts and the intellectual never belied his equally profound fondness for the absurd. Never one to care for taking himself too seriously, Wayne was possessed by a very keen and unremitting sense of humor. He always believed in seeing the comedy in life, and had a skillful sense of sarcasm that was always jovial or goofy but never very cynical or barbed. He really could make anyone laugh, and always wanted to have fun and enjoyed seeing the lighter side of life, and relished seeing others enjoy that same cheer too. Wayne's appreciation for music didn't just stop with just being an enthusiastic listener. He was also an avid Jazz influenced drummer who played professionally in a variety of bands throughout his 20's and 30's. His musical sensibilities informed that same attribute in those close to him, as he encouraged his love of music to live on in those he raised. Which owing to his innate graciousness, often included the many friends of his children as well. Wayne was also big Minnesota Wild and Vikings fan, who also enjoyed older classic movies, and was steeped in a knowledge of popular culture. Wayne is survived by 2 children Thomas James Wedan and David Wayne Wedan of Brooklyn Park, his brother Daryl Leroy Wedan of Colorado; and 2 nephews Bjorn Wedan and Quentin Wedan of Colorado; with very many bereaved friends and saddened acquaintances whom he met along his way through life. He is preceded in death by his parents James Leroy Wedan (70) and Sylvia Bernice Wedan (76); his sister Janice Eloise Wedan (72); Grandparents, all of whom immigrated from Sweden with their families to America in the late 1800s. Erick Wedan (76) and Emma (née Nelson) Wedan (63) & Carl Oscar Carlson (83) and Anna Eriksson (37). A ceremony of life is being planned for what would have been Wayne's 75th birthday on August 26, 2022. Anyone who knew Wayne is encouraged to contact Tom or David Wedan [email protected] 612-518-3430 [email protected] 612-236-6503

The family of Wayne Thomas Wedan created this Life Tributes page to make it easy to share your memories.

Send flowers to the Wedan family.