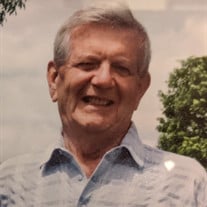 Wayne Ambuehl, age 84 of New Hope, passed away peacefully surrounded by family on November 18, 2021. Born to Lowell and Olga Ambuehl in the town of Mary near Ada, MN. He attended school in Ada and graduated 1954. In 1958 he entered the U.S. Army in September of that year. After 6 months of MP training in Fort Hood, Texas he was transferred to Germany in 1959 and spent 1 ½ years on MP duty. In 1960 he moved to Minneapolis and worked at Steelmaker in Bloomington. In 1962 he began working at Canteen Company of Minnesota at a job that lasted over 33 years. He retired in 1995. Wanting to stay busy, he worked at Minneapolis Auto Auction part-time, a job that lasted 8 years. He was an avid bowler and golfer. He enjoyed fishing, hunting, playing cards with his buddies, and trying his luck with fantasy football and at Mystic Lake. He took pride in all that he did and was well known for having pristine vehicles. He was a follower of the Minnesota Twins, Minnesota Wild and the Minnesota Vikings. He enjoyed traveling and had visited Las Vegas, Missouri (including Branson), Hawaii and Montana to name a few. He was joined in marriage to Arlene Johnson on June 30, 1962. They were married for 59 1/2 years. Survived by wife Arlene, son Kyle (Rhonda) Ambuehl; daughter Kris (Bryan) Winfield, grandson Michael Ambuehl, granddaughter Megan Ambuehl and many nieces/nephews and great nieces/great nephews. Preceded in death by parents, sisters Marceline and Barbara and brother Charles. He was an amazing husband, father, father-in-law, grandfather, uncle, great-uncle and friend. He will be dearly missed. Visitation at 10:00 a.m., memorial service at 11:00 a.m. on December 10th, at Washburn-McReavey Glen Haven Chapel at 5125 West Broadway Ave, Crystal, MN 55427. Burial will occur at a later date. Face-masks are required. In lieu of flowers, the family requests any donations be made to The American Cancer Society.

Wayne Ambuehl, age 84 of New Hope, passed away peacefully surrounded by family on November 18, 2021. Born to Lowell and Olga Ambuehl in the town of Mary near Ada, MN. He attended school in Ada and graduated 1954. In 1958 he entered the U.S.... View Obituary & Service Information

The family of Wayne Ambuehl created this Life Tributes page to make it easy to share your memories.

Send flowers to the Ambuehl family.