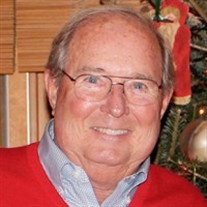 Wordelman, Todd Charles age 80, of Port Charlotte, Florida, passed away on September 19, 2021. Todd was born March 23, 1941, to Muriel (Syverson) Wordelman and Victor Karl Wordelman in St James, Minnesota. Todd spent his early years in St. James before moving to Benson, Minnesota when he was young. After graduation from Benson High School where he participated in sports and other activities, he attended the University of Minnesota and was a member of Psi Upsilon Fraternity. He studied a "little" and had lots of "fun" but most importantly made lifelong friends. Todd moved back to Benson, Minnesota after his time at the University of Minnesota and worked at Tyler Corporation where he sold fertilizer equipment. With that knowledge, he later moved his family to Valley City, North Dakota, and started his own company, Fertilizer Equipment, Inc. (FEI), which became family to him. He felt most at home being outdoors, golfing or traveling the world. He loved to teach his family and others about trees, flowers, and birds. Todd loved to hunt and fish with his family and friends in Minnesota, the Dakotas, Montana and Canada. One of the most special places to Todd was his family lake cabin on the Whitefish Chain of Lakes. He loved to entertain and spent many memorable sunsets, parties and holidays at the lake. Todd will always be remembered captaining the Toodleloon, obsessing over the sand pro to make sure the beach looked just right and being the Godfather of AB. Todd and his wife, Stephanie Wordelman, were married for 34 years and they loved to travel. They traveled the corners of the globe including Africa, South America, and Europe. Later in life, Todd and Stephanie moved to Florida where they golfed and attended "happy hours" with new friends they met in the Port Charlotte area. He was an avid reader, devoured history and was a supporter of any sports team with "Minnesota" on it. Todd will be greatly missed by his family and friends. He was preceded in death by his mother, Muriel Wordelman, his father, Victor Wordelman and wife Stephanie Wordelman. He is survived by his son Erik Wordelman (Brenda) and daughter Sarah Roehrich (John) brother Scott Wordelman (Donna), sister Vicky Schaefer (Dennis Herschbach), four nephews, & four grandchildren, Erin Wordelman, Mason Wordelman, Laura Roehrich and Jack Roehrich. Todd recently added two new step grandchildren, Maddie Borwege (Dylan) and Will Borwege. To the grandchildren, who loved him dearly, he will always be known as "Boppa" and he leaves the love of the Minnesota lakes in their hearts. There will be a celebration of life for Todd in the summer of 2022. Memorials to be determined at a later date.

The family of Todd Charles Wordelman created this Life Tributes page to make it easy to share your memories.

Send flowers to the Wordelman family.