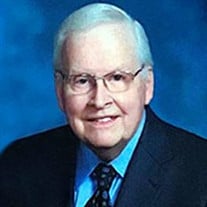 Richards, Thomas Henry Born February 6, 1926. Passed away peacefully on November 18, 2021, at age 95. Tom was born in Chicago, Illinois and was raised by his parents, Thomas H. and Alma (nee Kraseman). When he was eight years old, his parents and his sister, Janet, moved to a farm in Hamlet, Indiana. It was a learning experience for the whole family and together with help from many friends, they succeeded! Then the 1930's Depression- they survived! Tom was famous for telling stories of how difficult it was on the farm during the depression. Tom joined the Army during WWII and was very proud to be a WWII veteran. After the war, he graduated from Indiana University in 1950. There he met his future wife of 67 years, Joan (nee Karr). They were married in Chicago in 1954. Tom joined the 3M Company in 1953 and worked in various positions for 41 years. His job brought him and his family to St. Paul, Cleveland, Chicago, and finally back to Edina, MN where they lived for over 55 years. He was a wonderful husband and father to sons, Thomas K. (Elizabeth Kleber) and Robert H. (Maggy Aston) and was "Grandpa the Great" to three wonderful granddaughters, Mary, Rachel, and Rebekah. He loved golf, tennis, traveling the world, sports, but most of all his beloved Twins, Cubs, and the Vikings. He had many friends and relatives around the country. Tom retired from 3M in 1992 and spent vacations in Arizona and Naples, FL. After 28 years of fun and healthy retirement years, Tom and Joan moved to Friendship Village in Bloomington, MN. The Richards Family thanks the staff at Friendship Village for their loving care these past months. A memorial is to be at a later date. Washburn-McReavy.com Edina Chapel 952-920-3996

Richards, Thomas Henry Born February 6, 1926. Passed away peacefully on November 18, 2021, at age 95. Tom was born in Chicago, Illinois and was raised by his parents, Thomas H. and Alma (nee Kraseman). When he was eight years old, his parents... View Obituary & Service Information

The family of Thomas Henry Richards created this Life Tributes page to make it easy to share your memories.

Send flowers to the Richards family.