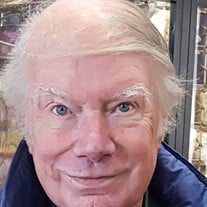 Thomas G. McCarthy Tom died peacefully early Sunday morning, May 8, at the Lyngblomsten Care Center. He was born on September 30, 1935 in St. Paul, MN to Albert and Ernestine (Barnes) McCarthy, the third of four boys. Tom grew up on St. Paul's East Side, attending Harding High School, while nourishing his love of golf as a caddy at Hillcrest Country Club as well as his creativity playing the violin. In the McCarthy family, a sport without a ball simply wasn't a sport. Unfortunately for Tom, he excelled at track, holding the record for the mile run at Harding. However, with or without fans in the stands, Tom stood out. After a two-year stint in the army, Tom followed his father, Albert, into the printing trade. Much of Tom's work as a printer centered around coaching the next generation of printers at the Star Tribune to become comfortable with the computerization that had begun to shape the industry. Tom was a gentle, caring man who loved his Irish heritage, connecting with friends and family over a beer and conversations surrounding his Golden Gophers. He loved his family dearly. Tom is preceded in death by his parents, Albert and Ernestine McCarthy; a brother, John McCarthy; sister-in-law, Kate McCarthy, and his life-partner of over 50-years, John Dorf. He is survived by his brothers, Richard McCarthy (Regina) and William McCarthy (Danette); sister-in-law, Lee Ann; many nieces and nephews; as well as special neighbors, Kathy Olmscheid and Jan Rak, and family friend, Betty Herman. Funeral service 10:30AM Wednesday, May 25 with visitation starting one hour prior at Washburn-McReavy Northeast Chapel. Interment Ft. Snelling National Cemetery.

The family of Thomas George McCarthy created this Life Tributes page to make it easy to share your memories.