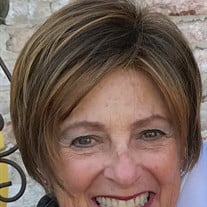 Teresina (Terry) E. Longval 74, of Eden Prairie, MN and Mesa, AZ, proud mother of three and grandmother of seven, passed away peacefully on March 13, 2022. Terry was born on April 11, 1947, in Sioux City, Iowa. On November 25, 1967, Terry married the love of her life, Joseph (Joe) Longval. They raised one daughter, Leslie and two sons, Brent and Scott. While cancer was the cause of death, Terry will forever be remembered for how she lived with compassion, positivity, curiosity, and kindness. Her genuine and caring personality was infectious, and led her to forge many lifelong friendships, which she cherished deeply. Nothing gave Terry more joy than her family. She was a devoted and loving wife, who treasured her 52 years of marriage to Joe. She was a supportive and loving mother, who always put her children's interests first. She passed along the ultimate gift to her children - a blueprint on how to raise families through unconditional love, encouragement and faith. She relished her role as a grandmother and she was an enthusiastic cheerleader at her grandchildren's numerous activities and sports and a model for the type of person to be. She continued to model this even in death; as an organ donor she gave the gift of sight to others. Terry was also an accomplished athlete throughout her life. She played basketball in high school and in later years developed a passion for tennis and golf. In recent years, she was an active member of the Las Sendes golf club in Arizona where she participated in multiple leagues and developed treasured friendships. And while Terry is no longer here in body, she has left us with her strong, life-long faith which has guided her to the Kingdom of God, where she has been reunited with Joe. Terry was preceded in death by her husband and soulmate, Joe, her father Isadore, mother Lilian, and sister, Betsey. Terry is survived her children, Leslie Witterschein (Joseph) of Chanhassen, J. Brent Longval (Lesley) of Shorewood and J. Scott Longval (Elizabeth) of St. Paul, along with seven grandchildren; Hannah, Henry and Sadie Witterschein; Andrew and Anna Longval; Mack and Gage Longval; sister Danese Anderson of Bloomington, and brother, Keith (Dorothy) Kuhn of Moville, IA. A visitation will be held on Thursday, March 31st from 5:00pm-8:00pm at Washburn-McReavy Funeral Home, 7625 Mitchell Road, Eden Prairie, MN.A Mass of the Resurrection will be held on Friday, April 1st at 10:30 am (with a visitation 1-hour prior) at Pax Christi Catholic Community, 12100 Pioneer Trail, Eden Prairie, MN. For those that cannot join us in person, the service will be livestreamed at https://www.paxchristi.com. In lieu of flowers, support to the Ed Anderson Scholarship Fund through Catholic Charities or NC Little Hospice in Edina, MN is preferred. Gifts to the scholarship fund will provide post-secondary scholarships to under resourced students and can be made at www.cctwincities.org/donate/donate-now/, Under designation please select 'other' and type in Ed Anderson Fund. The family would like to thank the wonderful caregivers at Methodist Hospital, MD Anderson and NC Little that cared for Terry during her illness.

The family of Terry Longval created this Life Tributes page to make it easy to share your memories.

Send flowers to the Longval family.