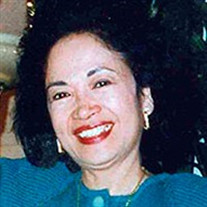 Cruz, Teodora 'Tedee' G. Cruz, Wally D. Tedee, age 84, of Minnetonka, passed away May 13, 2022. Wally, age 60, of Robbinsdale, passed away Jan. 22, 2022. Tedee and Wally leave behind a family that love them and will miss them dearly including, Christine Cruz Harper (Todd), Felicia Cruz (Doug Chesnut), Stella "Maria" Cruz Algrem (Eric), Cristina Cruz- Jones (Stephen Jones), Roger Frank, Alex, Eliot, Barrett, Roman, Declan, Wren, Sophia, Isabella, and Cecilia, Ron Even and Dr. Phil P. Gutierrez; other relatives, and friends. They are preceded in death by family members, Dr. Waldemar F. Cruz, Rica Cruz, and Lena Francesca Jones; Guillerma G. de los Santos, and Galicana G. Celi. Tedee came to the US from the Philippines in 1959. Was an RN who worked at Abbott-Northwestern but spent the bulk of her career in pediatrics working primarily with patients with leukemia or in need of an organ transplant at Station 55 and Unit 6A at the University of Minnesota Hospital and Clinics. She ended her career as a nurse working at Trevilla of Golden Valley with Alzheimer's patients. She was a skilled classical pianist, a gift she shared not only with her family, but the residents at Trevilla and occasionally at Presbyterian Homes locations. She also earned her Master's Degree in the late 1970's. She proudly became a US citizen in 1984. She loved to go out dancing, especially to Rupert's. She loved tending to her roses. She was fond of traveling, especially home to the Philippines and to Europe. She was a fantastic cook that probably did it more because she missed food from home than an actual love for it. Tedee will be remembered for her passion, intelligence, fun-loving nature, and always dressing to the nines. Wally graduated from Hopkins Charles A. Lindbergh High School in 1979. He was a devout Catholic. He enjoyed vegetable gardening and biking, frequently opting to bike instead of drive. He was an avid music fan of all genres, but especially his beloved classical. He enjoyed watching all the local sports teams, taking in the occasional Twins game. Wally was a tremendous foodie that loved to try every new restaurant as soon as it opened and would treat family and friends to his fantastic culinary skills. He shared his keen intelligence and love of history in his work at various book and music retailers throughout Minneapolis and the Southwest metro area. Wally will lovingly be remembered for his vast knowledge on all subjects and his gentle spirit. Visitation 4-7pm Thursday May 26th at Washburn-McReavy Edina Chapel, 5000 West 50th St., Edina. Mass of Christian Burial 11:00am Friday May 27th with visitation beginning at 10:00am at The Church of The Immaculate Heart of Mary, 13505 Excelsior Blvd, Minnetonka. Interment Resurrection Cemetery, Shorewood. washburn-mcreavy.com Edina Chapel 952-920-3996

The family of Teodora "Tedee" Cruz created this Life Tributes page to make it easy to share your memories.

Send flowers to the Cruz family.