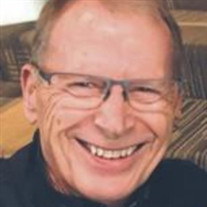 Steven Eric Westrum of Bloomington, MN endlessly fought, but peacefully departed this world at the age of 75 on the morning of March 30, 2022, at the Mayo Clinic in Rochester, MN. Steve was born on February 10, 1947, in Albert Lea, MN to the late Kathryn Elaine (Adams) Westrum and the late Kenith Ellsworth Westrum. In many ways, the experiences he had in his youth shaped him into the amazing man he was for his family and friends. He will be remembered by many as a fun-loving, caring, generous, selfless, hard-working, charismatic, young-hearted, and all-around special person. Steve graduated from Albert Lea High School in 1965 and Waldorf College in Forest City, IA in 1967 before following the love of his life, Vicki Leah (Kenis) Westrum to Mankato State, Mankato, MN and earning his bachelor's degree in Psychology in 1969, when he jokingly set his early career goals of wearing a tie to work and making at least $10,000 per year. Steve and Vicki were married on June 21, 1969. Shortly afterwards he was called for service to his country and was drafted into the US Army as an Aircraft Controller in Seoul, South Korea. He had a lifelong career in Human Resources working at King-Seeley Corporation in Albert Lea, MN, Miller Brewing Company in Milwaukee, WI, and United Healthcare and Lifetouch both in Minneapolis, MN. Throughout his 52-year marriage to Vicki, Steve learned how to love without limits, to be a partner, and best friend. In his three sons, he learned how to be a father, friend, role model, and mentor. Through his three daughters-in-law, he learned that he could love others as if they were his own children. In his six grandchildren, he found his calling and purpose; a uniquely special bond with each, personalized with care, support, and unconditional love. From his late beloved in-laws, Gemetha "Jimmie" and Charles Kenis, he learned some of life's greatest lessons. Steve's legacy is truly written in the hearts of his loving wife Vicki, their sons and daughters-in- laws Brad and Carrie (Schneider), Mark and Kelly (Nelson), and Brett and Megan (Heald) and their grandchildren Kaden, Tanner, Colin, Camryn, Drew, and Brooklyn Westrum. His love, guidance, adventure seeking, and fun-loving humor will live within them all forever. Steve is also survived by his cherished nieces and nephews, special in-laws Michael and Peggy Kenis and lifelong friends, Richard Rovang, Ted Koenecke and Robert Backes. He was preceded in death by his brother-in-law Gregory Kenis. In lieu of flowers, the family requests donations of blood and to a Cancer charity of your choice. Steve 's celebration of life will be held at a later date as he requested to give his body to research advancement at the Mayo Clinic. Notification forthcoming.

Steven Eric Westrum of Bloomington, MN endlessly fought, but peacefully departed this world at the age of 75 on the morning of March 30, 2022, at the Mayo Clinic in Rochester, MN. Steve was born on February 10, 1947, in Albert Lea, MN to the... View Obituary & Service Information

The family of Steven Eric Westrum created this Life Tributes page to make it easy to share your memories.

Send flowers to the Westrum family.