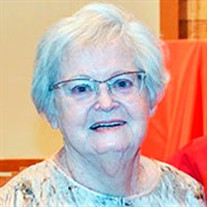 Sullivan, Sheila P. aged 83, danced peacefully into divine life surrounded by her loving family on February 17th at home in Eden Prairie, MN. Sheila was born the fourth of seven children to Margaret and John Hanley of the Bronx, New York. She was vastly loving, known for her unwavering devotion to our family (which included epic worrying skills) and her tremendous generosity of spirit and resources. Her daughters are particularly proud of our mother's drive to achieve both an undergraduate and graduate education, and for her long career in the classroom as an accomplished elementary school educator in Dumont, NJ. Sheila loved to golf, play cards, veg at the beach, and cherished her good friends. She had the loudest and most heartfelt laugh on the block and was at her liveliest with her fantastic siblings. Returning to a passion for art that she had set aside as a teen, Sheila became a skilled watercolor artist who was featured in many group and individual shows. She was a spiritual seeker and believer in the divine life. She was also a scientist at heart, and was infinitely curious about "what's next." While we all deeply grieve her absence, we are so excited that she knows the answer. We hope her beloved dogs Abner, Carey, Cavan and David met her barking wildly as she came home. Sheila is survived by her daughters Maureen (Dean) Andersen, Sheila Sullivan, and Trish (Pete) Vanni. Her six grandchildren (Nora, Justin, and Mairead Vanni, Matt and Aislinn Gigante and Nathan Andersen) were the delight of her recent decades. She will be held in the hearts of and remembered by an extended family of siblings, nieces, nephews, cousins and friends for years to come. The family is profoundly indebted to the impeccable caregivers of Park Nicollet Hospice and to the team of Halo Hospice who cared for her so lovingly and attentively this past year. Sheila was a cherished part of Charis Ecumenical Catholic Community. Mass of Christian burial will be held at 11:00 a.m. Saturday March 5th in the sanctuary of Prairie Lutheran Church in Eden Prairie.charisecc.org for Zoom link that will allow participation from afar.

Sullivan, Sheila P. aged 83, danced peacefully into divine life surrounded by her loving family on February 17th at home in Eden Prairie, MN. Sheila was born the fourth of seven children to Margaret and John Hanley of the Bronx, New York. She... View Obituary & Service Information

The family of Sheila P. Sullivan created this Life Tributes page to make it easy to share your memories.