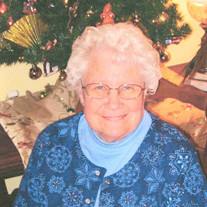 Sally Thompson died at 92 on January 1, 2022 after a brave battle with Alzheimer's & cancer. She lived most of her life in Madison and Deerfield Wisconsin until 2008 when she came to Minnesota to live with her daughter Kathy Bram. She graduated from Madison,Wis. West High School in 1947.Along with being a full time RN she was also a great home maker. She and her 1st husband, Elmer Bram, raised 5 children & built two family homes. She was well known for her cozy home, wonderful ginger snaps, chocolate cake, and chocolate chip cookies. She was a very loving mother and will be greatly missed by her 5 children, 2 grandchildren and 3 great grandchildren. Sally is survived by her children, Kathy Bram, Kristy Bram, David Bram, Scott Bram, and Will (Alice) Bram. Two grandchildren, Jessiah Bram and Ezra Bram. And 3 great grandchildren from Jessiah (Nathalie); Lorien Bram, Leo Bram, and baby #3 in production as of this date. Sally was born on November 22,1929 and was preceded in death by her parents, Grace & William Goff, her step-mother Bernice Goff, her sisters Virginia Reynoldson and Billie Motis, brother in law Jack Reynoldson Sr.,nephew Jack Reynoldson Jr. and daughter-in-law Lora Bram. Sally dedicated her life to helping others and was a registered nurse (RN) at Methodist Hospital and the University of Wisconsin hospital in Madison. She worked in the emergency room for over 44 years, often the grave yard shift.She was one of the first nurses to volunteer the Med Helicopter Flight Unit and for the AIDS ward at the UW Hospital. Sally also has spent countless hours volunteering as well as visiting the elderly in care facilities. Her giving & friendly spirit continued even while she was at the Open Circle Adult Day Care Center in Hopkins, MN. & her recent home at the Minnesota Masonic Home in Bloomington, MN. She was loved by all. Helping others, music, dance and performing for a crowd were some of her main passions in life. Sally was as graceful on roller skates as she was on the dance floor. She played the cello and the organ professionally. She competed in roller skate dance on a national level, tapped danced, square danced, and became Ms. Wisconsin Senior in 1997, by performing a show stopper, the charleston dance. She placed 12th, for Ms. Senior USA 1997. She was also on the Ski patrol at Wintergreen and Devils Head Ski Resorts in Wisconsin. With her third husband Lloyd she went to every big band dance they could. They performed dance routines at various venues for free. In 1990 she & Lloyd performed on the Art Linkletter show, "Nostalgia" TV filmed at the Oakwood Theater in Madison WI. Resulting in a 20 second dance spot between shows on PBS that ran for several years. Showing their favorite dance routine & music "Wood Chopper's Ball". Sally also made all of their costumes; sewing was another of her many talents. She was a joy to watch on stage. A Christian celebration of Sally's life will be held on Saturday Jan. 8 at 1:30pm for VACCINATED people at the Minnesota Masonic Home chapel: 11501 Masonic Home Drive, Bloomington, MN. 55437. We will be following CDC covid prevention guidelines. Note the Chapel requires vaccination proof to protect their vulnerable residents. Private interment will be at a later date in Madison Wis.

Sally Thompson died at 92 on January 1, 2022 after a brave battle with Alzheimer's & cancer. She lived most of her life in Madison and Deerfield Wisconsin until 2008 when she came to Minnesota to live with her daughter Kathy Bram. She graduated... View Obituary & Service Information

The family of Sally Ann Thompson created this Life Tributes page to make it easy to share your memories.

Send flowers to the Thompson family.