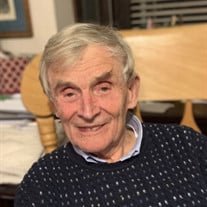 Roy Donald (Don) Hawkinson, born on March 28, 1937, departed on his final journey on March 31, 2022, after spending time with family and friends who gratefully joined him to celebrate his 85th birthday. Don graduated from Brown University in 1958, where he met his future bride. Don ran Hawkinson's Grocery and supported his family of five while putting himself through William Mitchell College of Law, graduating in 1971. He sold his grocery store in 1977 and practiced law until his retirement in 2018. He was dearly loved by his wife of 62 years, Joanie Hawkinson, his daughters, Cynthia (Peter) Hess, Judy Hawkinson (Patrick Plonski), and Stephanie Hawkinson (Patrick Opatz), and his many grandchildren, Emily, Maggie and Jeremy (Briana Draper) Hess, Patrick (Heatherann Jackson), Logan and Julian Hawkinson Plonski, and Aiden and Flynn Opatz. He was loved by many, and he will be missed by all. Don adopted the Boy Scout motto of leaving camp a better place than he found it, and this value manifested itself in his tireless work for social justice, feeding the hungry, housing the unhoused, and providing free and low-cost legal services to people in need, especially immigrants and refugees. Don lived in Linden Hills almost his entire life. He was only one man, but he was the whole world to many. Per his wishes, we are asking memorials sent to Alight (https://wearealight.org/) and earmarked for refugee children. A celebration of his life will be held at 4:00 p.m. on Friday, April 22, at Saint John's Episcopal Church in Linden Hills.

Roy Donald (Don) Hawkinson, born on March 28, 1937, departed on his final journey on March 31, 2022, after spending time with family and friends who gratefully joined him to celebrate his 85th birthday. Don graduated from Brown University in... View Obituary & Service Information

The family of Roy Donald Hawkinson created this Life Tributes page to make it easy to share your memories.

Send flowers to the Hawkinson family.