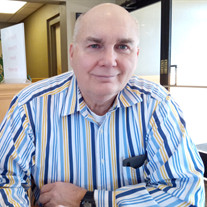 Ronald Ray Vogel, 67, passed away on Saturday, November 20, 2021, at Abbott Northwestern in Minneapolis from complications after recovering from Covid-19. He shared 36 years with his beloved wife Lucia Marina Vogel. Born in Minneapolis, Minnesota on October 1st 1954, Ronald was the youngest son of Doris Vogel (Hubert) and Sylvester John Vogel. He attended and graduated from Cambridge High School in 1974 and later took courses at the University of Minnesota. A gifted chess player, Ronald was the president of the Minnesota Kingsmen Chess Association for 10 years, editor of the association's official publication, and a US Chess Federation certified tournament director. His work and love for the game led to obtaining non-profit status for the association. Among Ronald's loved mementos were personal letters from President Ronald Reagan and Minnesota Gov. Albert Harold Quie stating that playing chess was an educational activity. Ronald worked for Marshall Manufacturing for more than 30 years as a CNC machinist-Lead. As a creative and gifted problem solver, Ronald decided the trade was the career for him after reading a machine manual just once. Most recently, he was looking forward to retirement in 2022 and considering the possibility of moving to a warmer climate with his wife. Ronald was a loving husband and devoted to his wife. He married Lucia in her native Honduras in July 1985 and later that same year they returned to Minnesota and wed in a religious ceremony. It was his honest, humble, and often silly sense of humor that won Lucia's heart. In his second letter to his future wife before having met her in person, Ronald confessed his "negative" points. "I'm losing all my hair. I live with my parents. I'm not good with laundry and I can't cook." His list of positive points included being a good son and brother and a generous uncle who always bought presents for his nieces and nephews. By the time the tall, balding Minnesotan with no Spanish skills arrived in the sweltering heat of the tropics, Lucia knew she had found her life partner. The young couple navigated their new life together in the Twin Cities, learning from each other's cultures. They explored the wonders of flea markets, food and music festivals, and museums. His modest nature helped Lucia and those close to him understand that being a decent human involves humility, honesty, collaboration, hard work, and generosity. He loved his family and friends and showed it best with acts of service. Whether it was giving someone a ride (or many), donating to countless charities, writing a letter to help someone out of an unfair lease, hosting travelers, missionaries, extended family, and acquaintances, coming up with creative and practical solutions for a safety concern at work, building a dinosaur sculpture for the front lawn, or making elaborate Halloween costumes for his kids, Ronald did it all with humbling openness. When he wasn't working long hours, Ronald worked on home projects. He single-handedly turned his one-story house into two stories. He enjoyed fishing or curling up on the basement's couch with his dog son Loki for a Bollywood or martial arts film. When the grandkids visited from out of state, the focus of his free time shifted to entertaining them and making sure they had plenty of laughs. His newest passion was politics. Saying that he LOVED talking about politics is an understatement. He ran for seat 41B in the Minnesota House of Representatives in 2020. Although he didn't win, he was not deterred and was gearing up to do it all over again in 2022. Ronald is survived by his spouse Lucia Marina Vogel; his children Daniel Vogel (Deanna), Matthew Vogel (Victoria); his grandchildren, Haley, Elizabeth, Raegan, Owen and Zola; sister Kathy Vogel and brother Joseph Vogel; nieces and nephews, Jason, Sarah, Todd, Jerrett, Jackie, Moses, Roxana, Roger, Julio, Joshua, David, Brian, David and his extended family in Honduras. He is preceded in death by his brother George Lantz, sister Dorothy Lantz, mother Doris Vogel, father Silvester Vogel, maternal grandparents William and Anna Hubert (Peckels), and paternal grandparents Joseph Andrew and Thersa Mary Vogel (Noll). Graveside funeral services will be held at 10 a.m. on December 2 at the Washburn-McReavy Hillside Cemetery.

The family of Ronald Ray Vogel created this Life Tributes page to make it easy to share your memories.

Send flowers to the Vogel family.