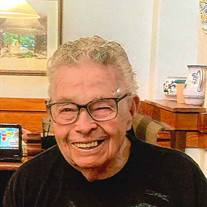 Cadieux, Ronald "Ronnie", age 87 of Mpls, passed away May 24, 2022. Preceded in death by parents, Lawrence and Helen; daughter, Michelle; twin sister, Joyce. Survived by partner of 40 years, Peggy; many cousins and numerous friends including many in the antique toy business. Ronnie served in the US Army 1955-1957. Ronnie worked in telecommunications for over 40 years, including employment with Western Electric, Northwestern Bell, retiring from AT&T. One of his passions was buying, collecting, and selling antique toys. Ron was a constant fixture at the Chicago Toy Soldier show from its earliest days, and always had tables full of the most unusual and eclectic ephemera, besides his American dime store soldiers, which were his great passion. His interests ultimately expanded into all types of American antique toys, and he became a constant attendee of the Kane County Toy show outside Chicago. A long-time Twin-Cities resident, he helped resurrect and develop the Northland Toy Antique Toy show in Saint Paul. He was always someone who knew a lot more than he let on and had a vast knowledge of dime store figures and vintage toys. He contributed articles to OTSN on this and related subjects. “Ronnie” had a wry and disarming sense of humor, was always flirtatious, and just loved the hobby and those he met in it. He was often accompanied by his daughter Michelle who became quite an accomplished toy dealer in her own right before her untimely passing in 2020. Ronnie had a zest for life, even in his later years when mobility issues limited his travels. He was one of the anchors of the twin-cities collectors, and his presence and unbridled enthusiasm for toys and those who collected them will be sorely missed. He was an avid scuba diver who travelled all over the world, for his employers and pleasure. Memorial gathering 4-7 PM Thursday, June 30 at Washburn-McReavy Columbia Heights Chapel, 4101 Central Ave NE. Interment Tues, Aug 9, 2022, 12:45 PM, assembly area #6 at Fort Snelling National Cemetery. www.Washburn-McReavy.com Col Hts Chapel 763-789-4436

The family of Ronald James Cadieux created this Life Tributes page to make it easy to share your memories.