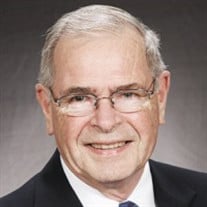 Cersine, Roger A. of Edina, MN passed away peacefully December 7, 2021, from renal failure. Roger was born December 4, 1935, in Ely, MN. He spent summers working in the iron ore mines and for the forest service. Roger was one of the youngest Boy Scouts to achieve the rank of Eagle Scout. He attended Ely Junior College, graduating from both St. Cloud State University and the University of Minnesota with his bachelor and master's degree. An avid Civil War buff, Roger was one of the toughest, most admired teachers at Washburn High School in Minneapolis teaching both Sociology and AP History until 1989. Roger devoted over half a century as a well-respected swimming and diving official at both the high school and college level. He served as the MN State High School League Swimming & Diving Rules interpreter for 35 years. His skills, knowledge and experience catapulted him to the national level, serving on the National Federation Swimming & Diving Rules Writing Committee. Roger also helped organize the MN Swimming Officials Association in 1972. He officiated men's and women's swim meets at the U of M, Big Ten Women's and Men's Championship Meets and Division I, II, and III NCAA Championship Meets. Roger also officiated at the Special Olympics. He was inducted into the MN High School League Hall of Fame and Coaches Hall of Fame. Roger played an integral role in the growth and expansion of Teacher Federal Credit Union to TruStone Financial serving on the Supervisory Committee, Mortgage Board of Directors and TruStone Board of Directors for 48 years. Roger was an avid outdoorsman who always looked forward to his summer canoe trips each year up in the Canadian wilderness. Roger is survived by his loving wife of over 62 years, Barbara, his son Michael (Rita) Cersine, daughter Amy (Jerry) Smith, and the joys of his life, his granddaughters Jeannie and Jackie Smith. Roger's quick wit, enormous sense of humor and endless array of jokes will be greatly missed. Roger was the life of the party. Services will be held at a later date. Memorials to the donor's choice. Washburn-McReavy.com Edina Chapel 952-920-3996

Cersine, Roger A. of Edina, MN passed away peacefully December 7, 2021, from renal failure. Roger was born December 4, 1935, in Ely, MN. He spent summers working in the iron ore mines and for the forest service. Roger was one of the youngest... View Obituary & Service Information

The family of Roger Allan Cersine created this Life Tributes page to make it easy to share your memories.

Cersine, Roger A. of Edina, MN passed away peacefully December...

Send flowers to the Cersine family.