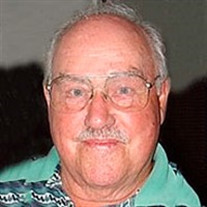 Neisius, Roderick "Rod" Jacob a resident of Sunrise of Roseville, passed away Saturday, Nov. 13, 2021 surrounded by his children. Born in Pierz, MN on Jan 27, 1928 to August A. Neisius, and Sophia A. (Loscheider) Neisius, Rod was raised in Pierz and graduated from Pierz High School in 1945. Rod enlisted in the Navy near the end of WWII and upon discharge enlisted with the Merchant Marines, where he spent several years sailing the Great Lakes. Rod often recounted with humor his many adventures in the mid-west cities he visited during his sailing days. Rod married Lois Joan Forsland on Apr 16, 1955 in Pierz, MN. They were the proprietors of Neisius Grocery located in Mpls. (later Rod's Grocery) for nearly 50 years. Together they raised a family and after closing the grocery store he retired in 1986. They had the good fortune to spend many years snow-birding to Gulf Shores and moved to Foley, AL in 1994. Rod returned to the Twin Cities following the death of his wife Lois in 2014 and lived for a time with his son Paul and daughter Elizabeth. Rod is preceded in death by his wife Lois, his parents, and son in law, James J. Gonsior. Rod is survived by his loving children, son Paul, daughters Elizabeth (Bruce) Beyer of White Bear Lake, MN, Mary Gonsior of Mpls., MN, Susan (Scott) Davis of Forest Lake, MN, Julie (Richard) Brooke of Moorpark, CA, 16 grandchildren and 7 great-grandchildren. Rod loved spending time with his family, and enjoyed solving crossword and soduko puzzles, golf, black Russians, and a trip now and then to the casino. Rod was a member of the Church of the Holy Name in Mpls., MN, and Our Lady of the Gulf Catholic Church, in Gulf Shores, AL. The family thanks the staff of Sunrise of Roseville, Allina Hospital and Hospice for the care they provided to our father during his final days. A memorial will be held in Minnesota in the summer of 2022, date to be announced. Memorials preferred to donor's favorite charity. Rod was welcomed to heaven on a snowy Minnesota day, as the heavens opened to greet him. God Bless you, Dad.

Neisius, Roderick "Rod" Jacob a resident of Sunrise of Roseville, passed away Saturday, Nov. 13, 2021 surrounded by his children. Born in Pierz, MN on Jan 27, 1928 to August A. Neisius, and Sophia A. (Loscheider) Neisius, Rod was raised in Pierz... View Obituary & Service Information

The family of Roderick Jacob Neisius created this Life Tributes page to make it easy to share your memories.

Neisius, Roderick &quot;Rod&quot; Jacob a resident of Sunrise of Roseville,...

Send flowers to the Neisius family.