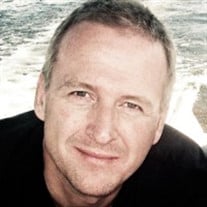 Norlien, Robert Arley of Columbia Heights, MN passed away unexpectedly on June 6th, 2022 at the age of 57. Rob will be dearly missed by his wife Janelle, children Courtney (Jesse) Lindahl, Trevor, and Tristan, mother Ruby, siblings Nan (Rick) Cecka, Kim (Lori), Mark and several nieces, nephews, extended family, and dear friends. He is preceded in death by his father, Arley Norlien. Rob was born and raised in Columbia Heights. He attended Silver Lake grade school and Columbia Junior High. He attended and was confirmed at First Lutheran Church of Columbia Heights. He graduated from Columbia Heights High School in 1982. Rob worked at his father's store, Champion Auto, as a young man and then eventually moved on to work for the corporate Champion Auto store. While holding down a full-time job at Champion Auto, he also worked at the Star Tribune as a truck driver. Rob would ultimately join the Star Tribune full-time as a driver, where he worked for over 30 years. Rob was a loving husband to Janelle, they celebrated their 30th wedding anniversary last October. They would spend their free time antiquing and working on projects together. Rob was a fun-loving and dedicated father to his three children. If you ran into Rob and asked about his children, he would light up and tell you what they all were doing. He was so very proud of who they have become and all of their accomplishments. Rob was always busy doing something or working on a project. In between that, he loved playing sports and hanging out with family and friends. He was very competitive and was always ready for a game of anything - tennis, golf, ping-pong, darts, basketball, softball, or hockey. He also loved his card games with his buddies. Rob will be missed by a great number of people. We love you and miss you! Visitation and funeral to be held on June 15th at Eagle Brook Church - Blaine Campus (3603 95th Ave NE, Circle Pines). 10:00am visitation, 11:00am service. Burial at Sunset Cemetery immediately following the service (2250 St. Anthony Blvd, Minneapolis).

The family of Robert Arley Norlien created this Life Tributes page to make it easy to share your memories.

Send flowers to the Norlien family.