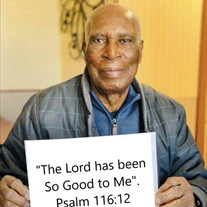 Reflections of Life On April 1, 1931, Robert Lindsay Bogan was born to the late Robert Wilson and Angie Evans-Bogan in Newton, MS. To this union, he was one of 9 children. Affectionately known as "RL", and family and friends also called him; Papa, Uncle R.L., Godfather, Deacon Bogan, but to us we he's simply "Daddy". Robert served in the Military and he was proud to be a Vet! On March 3, 1952 he enlisted in United States Army and held the rank of E4 Corporal. He earned 3 Bronze Stars and had an honorable discharge in 1954. Robert's faith in GOD began at a young age in Newton, MS. where he attended his families church, Mount Mariah Missionary Baptist Church. R.L was one of the founding members of the Morning Stars Quartet Group in Newton, Mississippi. The group of 5 included his brother Charles Bogan and 3 of their cousins, J.C Evans and twins Albert & Elbert Evans. Robert Loved quartet groups like: The Might Clouds of Joy, The Original Mississippi Blind Boys, The Dixie Hummingbirds Robert moved to Minnesota in 1954, where he met the Love of His life - Lenora "Honeybee" Robinson. After two years of courting, they were married on January 5, 1957. R.L. and Honeybee were blessed to celebrate 62 years of marriage and a lifetime of unconditional love until the Lord called Honeybee home on July 23, 2019. Robert and Honeybee were the proud parents of two children, Robert Jr. and Darlene, but they had so much love to give so they also opened their home to countless family members who were relocating to MN as well as hundreds of foster children, and if you needed somewhere to stay, they had a spot for you. Some came in as strangers but left as family! They would always say "Now that's what real family is" Robert and Honeybee became members of Pilgrim Rest Missionary Baptist Church in 1957 under the leadership of the Late Rev. Joseph Jackson and submitted to his leadership for over 23 years. Then they became members of First Community Baptist Church under the late Rev. E.Z. Byrd until he went to be with the Lord, they faithfully served under the leadership of Pastor Terry D. Williams and moved on to New Faith Baptist Church under Rev. John Young, where he remained faithful until the Covid 19 and Pandemic forced the doors of the church to close in August 2021. During his servanthood he was appointed Chairman of the Deacon Board and helped in any area of the church where he saw a need including being the church Plumber and handyman. He truly had a heart of a servant and remained faithful, living the scriptures found in 1 Timothy 3:8-13 "Qualifications for Deacons" 8 Deacons likewise must be dignified, not double-tongued,[a] not addicted to much wine, not greedy for dishonest gain. 9 They must hold the mystery of the faith with a clear conscience. 10 And let them also be tested first; then let them serve as deacons if they prove themselves blameless. 11 Their wives likewise[b] must be dignified, not slanderers, but sober-minded, faithful in all things. 12 Let deacons each be the husband of one wife, managing their children and their own households well. 13 For those who serve well as deacons gain a good standing for themselves and also great confidence in the faith that is in Christ Jesus. On February 23rd, 2022 he stated " I want to be a member of a church before I leave". So one week and tree days later he became an honorary Member and honorary Deacon at New Oil Christian Center under the leadership of Pastor Bruce and First Lady Brenda Carpenter. He was overjoyed and felt his task had been completed. Robert and Honeybee were known by almost every preacher in the Twin Cities! They would host Prayer Meetings, Bible study, Marriage Fellowship and from time to time even there was the amazing toe- tapping-foot stomping quartet rehearsals at the house. We grew up surrounded with the love of our parents, family, community and the true meaning of a village. We didn't have to go out and look for it, Momma & Daddy were the canter of the village! Robert was a mighty Man of Valor and always gave unconditional love to everyone he came in contact with. He had the ability to bring people together no matter the situation; he was a peacemaker and truly a friend of God. He lived the life he talked about daily. Robert looked forward to the "Super Soul Sunday Dinners" Every week with Darlene & Curtis as they had the soul food dinner, him and Curtis would watch the football/basketball game, then it was time to play spades. He had an extremely completive side that many have never seen! (Unless you were at the Super Sunday Dinners) He called himself "Cut Throat" and when he sat down and the first hand of spades were dealt... Oh my...you better watch out! He would cut any and every card played! He made sure to not only get his books but also to set you! We saw this as we grew up watching him and momma playing cards (Spades & Bid-Whist) and also dominos. Robert worked for Sol & Kronic Company for 42 years retired on May 31, 1996. Robert gained his wings and departed this life on Monday, March 7, 2022 at his home surrounded by his family. He was preceded in death by his parents; Robert Wilson & Angie Bogan, 4 brothers; Eugene Bogan, Charles Bogan, Claybon Bogan and Daniel Bogan. 4 Sisters; Larcenia Roberts, Carneila Whitcomb, Lucille Crisler and Carlean Butler. Robert leaves to cherish her precious memories one son; Robert Bogan Jr. (Ann) of Evanston, IL, and one daughter; Darlene Bell (Curtis) of Brooklyn Park, MN. 14 grandchildren, 30 greatgrandchildren, 1 Great-Great Granddaughter, 3 Sister-N-Loves; Vaddis "Nellie" Henderson of Ocoee, Florida, Ella Mae Bogan and Clara Bogan Nakumbe of Minneapolis. A very special Goddaughter, Shamarva Farmer who help with caring for him until the very end. Also, an unmeasurable number of nieces, nephews, cousins, godchildren, family, neighbors and friends.

Reflections of Life On April 1, 1931, Robert Lindsay Bogan was born to the late Robert Wilson and Angie Evans-Bogan in Newton, MS. To this union, he was one of 9 children. Affectionately known as "RL", and family and friends also called him;... View Obituary & Service Information

The family of Robert L. Bogan, Sr. created this Life Tributes page to make it easy to share your memories.

Send flowers to the Bogan family.