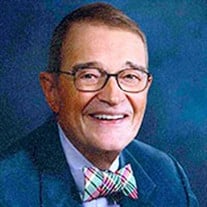 Schmoker, Richard C. 81. Went to meet Jesus peacefully on April 3, 2022. Born in Lincoln, Nebraska to Leona & Walter C. Schmoker on December 5, 1940. Dick graduated from Lincoln Southeast High School in 1958, graduated Phi Beta Kappa from the University of Nebraska-Lincoln where he was a member of the Sigma Nu fraternity, and graduated 2nd in his law class at the University of Nebraska Law School where he was on the Law Review. Dick married Kit (Catherine Stuart) in 1963. Dick & Kit moved to Edina, Minnesota where Dick took his one and only job with Faegre & Benson, and he worked as a trust and estate attorney for over 43 years. He loved what he did and the people he worked with every day. He was the best ever - and loved his clients. He was a gentleman of great character with the admirable traits of humility, kindness, grace, compassion, generosity, thoughtfulness, dignity, a zest for living, and boundless optimism and cheerfulness. Every relationship he had was important to him. Dick had the gift of making everyone feel valued, loved, important, and worthy. His infectious laugh, welcoming smile, and willingness to lend a hand in all matters will be greatly missed. Dick was actively involved on many boards, including: Chair of the Jeremiah Program, two terms on The Blake School Board of Trustees, and on the Board of Directors at the National Bank of Commerce in Lincoln, NE. An avid man of faith, Dick served four different churches in the Twin Cities in several different capacities. He coached his children's athletic teams where he was both a teacher and a mentor. Dick believed in education and provided financial help to those in need. The greatest joy of his life, however, was his wife Kit and the family that they built together. As much as he enjoyed his work, he loved hunting, fishing, being at the cabin, and just spending time with his children and grandchildren - they were his priority. He is survived by his loving wife Catherine "Kit" (Stuart) Schmoker; children and spouses: Kim & Willard Hunnewell, Bill & Cindy Schmoker, Lisa & Boyd Hesdorffer; grandchildren: Johnathon, Topher, Richard & William Hunnewell, Katie & Maggie Schmoker, and Stuart & Davis Hesdorffer; brother-in-law William "Scott" Stuart (Jane); sister Kay Welsch; many nieces and nephews; and too many close friends to count. Preceded in death by his parents, Leona (Schultz) & Walter C. Schmoker; in-laws, Helen Catherine "HK" and James "Jim" Stuart; brothers-in-law, James Stuart, Jr. and Delane Welsch. Memorial service Thursday, April 28 at Colonial Church of Edina, 6200 Colonial Way, at 11 AM with visitation one hour before the service. Reception immediately following. Service will be live streamed at https://www.youtube.com/colonialchurchmn. In lieu of flowers or gifts, please send memorials to Hope Academy (2300 Chicago Ave So, Mpls, MN 55404), or the Jeremiah Program (615 1st Ave NE, Suite 210, Mpls, MN 55413). Washburn-McReavy.com Edina Chapel 952-920-3996

The family of Richard Charles Schmoker created this Life Tributes page to make it easy to share your memories.

Send flowers to the Schmoker family.