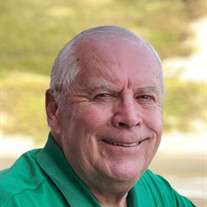 Johnson, Richard "Rick" Age 75, transitioned to heaven on March 19, 2022 surrounded by his immediate family in Bloomington, MN. Survived by his wife of 54 years, Kathy; son Brandon and wife, Ariel, grandson Sorin; plus, sisters Carol Stevens, Laurie Pilialoha and brother Tom Johnson and wife Jennifer; nieces, nephews and other relatives. Preceded in death by parents, Richard and Dolores Johnson and sister Pamela Johnson. Most of Rick's childhood was spent in Richfield, however he graduated from Benilde High School. He then went on to get an Associate Degree from the University of Minnesota. For over 30 years, Rick worked in Park Maintenance for the City of Bloomington. A talented craftsman and blessed with being mechanically inclined, he could fix or build just about anything. Rick was a member of The Bloomington Jaycees and an active Coach for the Jefferson youth hockey program and Babe Ruth baseball league. Golf was among his greatest passions as well as a wide variety of sports, dancing, music and cars. Throughout his life he made numerous friendships and his joyous presence was felt by all. Toward the end of his retirement, he spent his winters in Gold Canyon, AZ soaking up the sun and laughing with his friends. Rick isn't gone...he's just not here. Join us in a Celebration of Life, Wednesday April 6th, 2022 at 10am, Visitation 1 hour prior to Mass, The Church of St. Edward, 9401 Nesbitt Ave, Bloomington, MN 55437. Interment Dawn Valley Memorial Park, 9940 Bush Lake Rd, Bloomington, MN 55438.

The family of Richard Dennis Johnson created this Life Tributes page to make it easy to share your memories.

Age 75, transitioned to heaven on March...