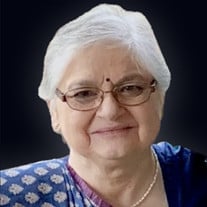 Rekha Bhatt, 78, of Plymouth, MN, died February 24, 2022 at home surrounded by her loving family and friends. She was born September 5, 1943, in Gujarat, India, and was one of four siblings. She is predeceased by her husband, Harshad P. Bhatt and survived by their only daughter, Paurvi Bhatt; and brother (Jayesh Jha) and sister (Nima Raval). She is cherished by countless relatives, friends, and community members. Rekha was a generous, courageous, and noble soul. As a first-generation Indian immigrant who came to the U.S. in the early 1960s, Rekha was dedicated to ensuring a better future for the next generation. She was a champion of community organizations, such as Gujarati Samaj, and was a dedicated, medical records professional in hospital systems in the Twin Cities and Chicago. She was known for bringing cultures together by sharing perspectives, traditions, and faith. When people speak of Rekha, they recall her magnetic smile, her generosity, and her wisdom and skills - whether it be cooking or joining Hindu traditions like Diwali (the Festival of Lights). Rekha believed that sharing stories is how you keep legacies alive. As someone who learned English as a second language, Rekha's close family and friends marveled at her voracious love of current events, politics, astronomy, and English and Gujarati literature. Her humor, wisdom, and selflessness will be deeply missed by all who knew her. Rekha Bhatt's service is being held on Sunday, February 27, 2022, at Hillside Chapel. In lieu of flowers, please donate to causes that mattered most to Rekha: women's education and children's health for underserved communities. The Carter Center and Ekal Foundation are two organizations where Rekha was a long-time donor.

Rekha Bhatt, 78, of Plymouth, MN, died February 24, 2022 at home surrounded by her loving family and friends. She was born September 5, 1943, in Gujarat, India, and was one of four siblings. She is predeceased by her husband, Harshad P. Bhatt... View Obituary & Service Information

The family of Rekha Harshad Bhatt created this Life Tributes page to make it easy to share your memories.

Send flowers to the Bhatt family.