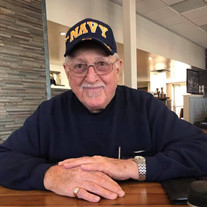 Raymond Francis Johnson, age 89 of Hopkins passed away suddenly of a heart attack on December 29, 2021, shortly after arriving at the VA Hospital with his daughter, Stacy at his side. He always gave high praise of the Veterans Administration medical staff. He served in the Navy during the Korean War. Raymond, "Ray" was born May 25, 1932, to Clem and Agnes Johnson. He was one of eight children, so always had older and younger playmates. He loved to play baseball and enjoyed theatre. Ray loved talking to people. He could pick up a conversation with anyone, which served him well as a bartender at Duff's downtown Minneapolis where he worked for years. He loved to golf and one of his most favorite volunteer activities was at the Burnet Senior Golf Classics where he volunteered for years with his brother Bob. They had lots of fun meeting world famous golfers. Ray was an artist. He loved creating special works of art for his friends at the Elks Lodge #2221, where he was a member. An unfinished work, a picture of Prince that he was creating for his daughter Stacy, was sitting on his easel when he died. It's still lovely, even in its unfinished state. One of his favorite things to do was try new restaurants with his daughter and have fun critiquing the artwork. Ray was preceded in death by parents Clement and Agnes, sister Barb, brothers Clem and Bob. He is survived by his sisters, Rita, Marilyn, and Jean, his daughter Stacy Ruth Johnson and her mother, Veronica Johnson. Ray's sense of humor was infectious. He left a piece of his heart with all who knew him. Memorials preferred donated to a charity of your choice. There will be a brief service and interment with military honors at the Fort Snelling Cemetery, January 31, 2022, 11 AM. Leave a message for his family at: www.Washburn-McReavy.com

Raymond Francis Johnson, age 89 of Hopkins passed away suddenly of a heart attack on December 29, 2021, shortly after arriving at the VA Hospital with his daughter, Stacy at his side. He always gave high praise of the Veterans Administration... View Obituary & Service Information

The family of Raymond Francis Johnson created this Life Tributes page to make it easy to share your memories.