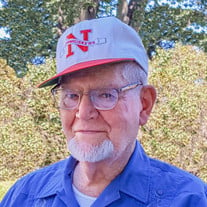 Raymond (Ray) Hagberg of Roseville, Minnesota joined his Lord and Savior in heaven on January 24th, 2022. He was born in rural Boyd County, Nebraska in November 1930. He graduated from Spencer High School in 1948, attended Luther College and Dana College, served in the U.S. Army during the Korean Conflict, and earned master's degrees from the University of Nebraska, Omaha and Northwestern Seminary, St. Paul, Minnesota. He and his wife Nellie Faye were married in June 1956. They served as Lutheran missionaries in Tanzania, East Africa in education and pastoral ministries where they were involved in building churches, famine relief, and leadership development from 1958 to 1994. They retired to Spencer, Nebraska in 1995. Ray served as a supply pastor in North Central Nebraska and Pastor for St. Dysmas Congregation at Mike Durfee State Prison. He was an active member of Trinity Lutheran Church in Bristow, Nebraska, American Legion, and the Spencer Lions Club. He served on the Spencer Village Council and advocated for the development of the Spencer Pond. He was a founding member of Highland House Assisted Living Center, eventually residing there with Nellie Faye until their move in 2016 to EagleCrest Senior Care Center in Roseville, Minnesota. After his move to Minnesota, he continued to serve others by volunteering at Bridging and investing in the lives of residents and staff at EagleCrest. Ray was relational, intentional, and caring for those around him and for those in need. He lovingly cared for Nellie Faye and his family. He enjoyed woodworking, gardening, fishing, and other outdoor activities. He loved his family and serving Christ by serving others. He was preceded in death by his wife of 60 years Nellie Faye (Larsen), parents Ernest and Hilda (Nelson), brothers Lloyd and Morris, and grandson Simeon. He is survived by his children Lynnae (Don) Winnes, Rochelle (Paul) Funk, and Vaughan (Aleda), ten grandchildren and two great grandchildren. He is also survived by his brother Norman (Joyce), sister-in-law Nola, nieces, and nephews. Memorial Services will be held at EagleCrest Senior Care Center, 2925 Lincoln Drive, Roseville, MN 2:00 PM, February 4 and at Trinity Lutheran Church, Bristow, NE 10:30 AM February 7.

Raymond (Ray) Hagberg of Roseville, Minnesota joined his Lord and Savior in heaven on January 24th, 2022. He was born in rural Boyd County, Nebraska in November 1930. He graduated from Spencer High School in 1948, attended Luther College and Dana... View Obituary & Service Information

The family of Raymond Lester Hagberg created this Life Tributes page to make it easy to share your memories.

Send flowers to the Hagberg family.