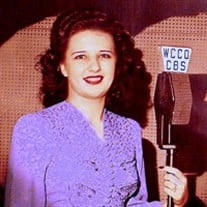 Hertsgaard, Phyllis A. of St. Louis Park, popular 1940's-50's vocalist, was called home to God on October 25, 2021, still with a joyful song in her heart. She was age 101, born January 31st, 1920. Preceded in death by parents, Ralph and Margaret Moudry; sister, Elizabeth Risvold; brother, Ralph Moudry Jr. Phyllis is survived by her sons, David (wife Sandra) Hertsgaard, and Daniel Hertsgaard; grandchildren, Myke'lle Laws (husband Craig), Heidi Barnett (husband Michael), Aaron Hertsgaard (wife Michelle Malpica-Hertsgaard), John Fiorentino (wife Kitty), and Anna Liedahl-Hertsgaard; great grandchildren, Marlee, Jacob, Sonya, and Lance Laws, Haden and Harrison Barnett, and nieces and nephews. Born and raised in Minneapolis, she learned to play the piano and sing early in life and at age 19 became the big band soloist at Minneapolis' famed Charlies Café Exceptionale'. There, she was heard and hired by WCCO Radio management and became a daily member of the "Good Neighbor to the Northwest" family of broadcasters. She met and fell in love with popular WCCO Radio air personality Rolf Hertsgaard (deceased). They married and resided in St. Louis Park, MN. where she spent the rest of her life. Phyllis was a very devout Christian and longtime member of Most Holy Trinity Catholic Church in St. Louis Park where she was an active volunteer for many years. When in times of difficulty she would commonly say, "Just put it in the hands of the Lord!" A greatly appreciated, loving and devoted mother whose friendly, welcoming smile will be deeply missed. Mass of Christian Burial 10:30am Friday November 19th with visitation beginning at 9:30am at The Church of Our Lady of Grace Chapel, 5051 Eden Ave South, Edina. Immediatly following the funeral mass a luncheon will be served. Interment Eden Prairie Mausoleum. Washburn-McReavy.com Edina Chapel 952-920-3996 In leiu of flowers memorials preferred to the Hertsgaard family.

The family of Phyllis Anne Hertsgaard created this Life Tributes page to make it easy to share your memories.

Send flowers to the Hertsgaard family.