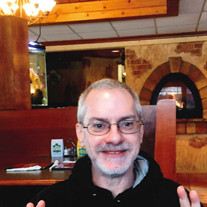 Philip George Malmstedt age 56 died unexpectedly April 8, 2022, of cardiac arrest in the loving presence of his parents at the University of Minnesota Heart Hospital, Minneapolis, MN. We will have a celebration of life to honor Philip on June __, 2022, at Washburn McReavy Funeral Home, Coon Rapids, MN. Philip will be buried at Sunset Cemetery, Minneapolis, MN in a private ceremony. Philip was born to Susann and Philip in Fargo, ND on November 9, 1965. Philip graduated in1984 from the Minnesota State Academy for the Deaf (MSAD) in Faribault. He received a scholarship and attended Rochester Institute of Technology for the deaf. Philip was a beloved son, brother, uncle and friend. He is preceded in death by his Grandparents Philip A & Carmel Malmstedt, Robert & Viola Stedman and his Nephew Allen Giller. Philip is survived by his Parents Susann & Philip P Malmstedt; Sister Deborah Giller; Children Nathan and Ledia Malmstedt; Nephews William, Jeffrey, and Troy; many aunts, uncles, cousins and friends. Philip had a lifelong interest in astronomy, electronics and robotics. He got his first telescope at age seven and had posters of the universe on his bedroom walls. Even as a little boy he'd go out late at night to study the stars. He subscribed to Astronomy Magazine and clipped articles out of the newspaper about night sky phenomenon. He loved his faithful dogs Victor and Sheeba. Philip's greatest joy in life was his two children, Nathan and Ledia. He enjoyed being a father from the time they were babies to the present. They enjoyed being together making popcorn and pancakes and playing outside. They all enjoyed biking, tossing frisbees and football. Carving pumpkins and roasting pumpkin seeds was a family tradition. Whether watching movies or putting puzzles together (a favorite puzzle was of the universe) they just enjoyed the company of one another. In lieu of flowers, memorials may be sent in honor of Philip to Minnesota State Academy for the Deaf, 615 Olaf Hanson Dr, Faribault, MN 55021.

Philip George Malmstedt age 56 died unexpectedly April 8, 2022, of cardiac arrest in the loving presence of his parents at the University of Minnesota Heart Hospital, Minneapolis, MN. We will have a celebration of life to honor Philip on June... View Obituary & Service Information

The family of Philip George Malmstedt created this Life Tributes page to make it easy to share your memories.