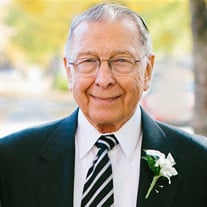 Peter Eilert Fehr was born January 9, 1932 to Eilert and Clara (Luithle) Fehr on his grandfather's farm in East Grand Forks, MN. The family continued to live with Peter's grandfather until 1939 when his parents purchased a farm of their own in rural East Grand Forks. During evangelism services at Grace Baptist Church in Grand Forks, ND, at age 8, Peter accepted Jesus Christ as his personal Savior and was baptized the following spring. Peter attended grades one through eight at Driscoll School, District 31, a one-room school near his home. He graduated from the boarding high school Northwest School of Agriculture in Crookston, MN in 1950. At age 16, Peter attended summer Bible camp. There he heard Lois Ahrens, a missionary on furlough from Cameroon, West Africa, speak about a new hospital that the North American Baptist (NAB) Conference was going to open in Cameroon and the need for a doctor for the hospital. "At that point, I committed myself to being that doctor in Cameroon, feeling the call of God to that ministry," Peter said. "My life was changed. I had to change my study plans in high school and everything I was planning." Upon graduation from high school, Peter attended the University of Minnesota (UMN). In the spring of his sophomore year, he was invited to Faith Baptist Church in Minneapolis. There he met Doris Adam. On September 11, 1954, Peter and Doris were married by Rev. Adam Huber at Faith Baptist Church. They were blessed with five children: Diana, Paul (who died as an infant), David, Douglas, and Doreen. Peter earned his B.A. in 1953 and his M.D. from the UMN Medical School in 1957. He was also ordained for ministry. He and Doris were commissioned as missionaries at the Triennial Conference of the NAB in Edmonton, Alberta in August of 1958. The couple traveled to Cameroon, and Peter began serving at Banso Baptist Hospital. The majority of their time on the mission field was spent in Banso, and they also served for two years in Bamenda. In addition to his medical work, Peter's roles included hospital manager, supervisor of local grade schools, and field missionary for the Banso and Oku churches. Peter often commented that his experience on the farm and in agriculture school helped him in his "side job" of mechanic, repairing generators for the hospital and maintaining vehicles. Because Peter's allergies to tropical pollens had progressed to some bouts of asthma and the medications available at that time provided very poor control, the family moved to the United States (Robbinsdale, MN) after approximately ten years of mission service. In 1972 the Fehrs purchased a lake home in Robbinsdale, where they remained until August of 2019. During that time, they enjoyed entertaining many guests and hosting Sunday dinners for their extended family. They also welcomed their church family for backyard baptisms and Whiz Bang Days fireworks gatherings. Peter completed OB/GYN residency and board exams, and he began practice in the Twin Cities, where he served as a doctor of OB/GYN and later as a Perinatologist until 2005. In addition, he served on the Clinical Faculty of the UMN Medical School, giving lectures and working with both students and residents. Peter volunteered with the NAB Conference and Seminary for many years. He and Doris traveled extensively as he served with the Baptist World Alliance. He was also an active member of Faith Baptist Church, serving in a variety of positions. In 2019 Peter and Doris moved to Copperfield Senior Living in Robbinsdale; in 2021 they transferred to Maranatha Care Center in Brooklyn Center, MN. Peter passed away on May 8, 2022 after a short illness. Peter was preceded in death by his infant son, Paul Fehr; his parents; sister Carol Peterson; sisters-in-law Elinor Fehr, Diana Fehr, and Mildred Adam; brothers-in-law William Rath and John Adam. He is survived by his wife of 67 years, Doris A. Fehr; children Diana Wogensen, David Fehr, Douglas (Sharilyn) Fehr, and Doreen Fehr, all from the Twin Cities, and daughter-in-law Elizabeth Fehr of Big Sky, MT; grandchildren Lindsay (Matthew) McCoy, Jaime (Benjamin) Cook, Emily (Adam) Pettersen, Alexis Fehr, Peter D. Fehr, Shaelyse Fehr, and Jeddiah Fehr; ten great-grandchildren; siblings Marjorie (Harold) Lang, Jean Rath, Walter Fehr, Eric (Chris) Fehr, Robert Fehr; and many nieces, nephews, other relatives, and friends. Memorial service June 7, 2022, 10:30 a.m. at Faith Baptist Church, Minneapolis; visitation at 9:30 a.m. Livestream will be available at https://www.faithmpls.org/fehrfuneral. Reception lunch followed by inurnment at Glen Haven Memorial Gardens, Crystal, MN. Memorials may be designated to Faith Baptist Church, Minneapolis.

Peter Eilert Fehr was born January 9, 1932 to Eilert and Clara (Luithle) Fehr on his grandfather's farm in East Grand Forks, MN. The family continued to live with Peter's grandfather until 1939 when his parents purchased a farm of their own... View Obituary & Service Information

The family of Peter Eilert Fehr created this Life Tributes page to make it easy to share your memories.

Send flowers to the Fehr family.