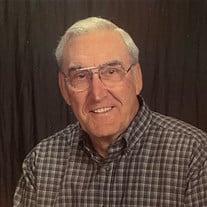 Peter William Aschbacher, formerly of Fargo, died peacefully at the age of 94 at English Rose Suites in Edina, MN on June 20, 2022. Peter Aschbacher was born on April 20, 1928 in Ashland, WI and was raised on a small dairy farm. After serving in the Army, he graduated from the University of Wisconsin with a PhD in Dairy Husbandry. The majority of his professional career was spent as a research physiologist with the Biosciences Research Laboratory in Fargo. He retired as a research leader in 1993 after 30 years of federal service. The UW Dairy Science Department is where he met Jacqulene Thompson. They married in January 1955 and soon moved to Fargo, ND where they raised three daughters. Peter was a dedicated husband and father. He was an honest and honorable man and inspired those qualities in his daughters. He and Jackie were married for 63 years and shared a love for the outdoors and travel. Building a cabin at Island Lake was a dream that provided an opportunity for children and grandchildren to share his love for the outdoors. Peter was multi-talented and athletic. Hunting, fishing, hiking, camping, and bird watching were integral parts of his life. He also enjoyed softball, basketball, and bowling. He was a skilled handyman and built furniture for his family. He was an avid gardener at home in Fargo and with his hosta beds at Island Lake. Peter's culinary skills included Christmas caramels, pancakes for breakfast, and steaks on the grill. On weekends he could be found closely monitoring his watch to ensure the steaks were done to perfection. Peter was an active volunteer in organizations he believed in. He was president of the Fargo Audubon Society and docent at the Tamarac National Wildlife Refuge. He reported annual loon counts on Island Lake and water clarity readings to the MN DNR. His volunteerism also included being a lector and usher at Holy Spirit Church, Boy Scout leader, Big Brother youth mentor, and a regular blood donor. After retirement, he traveled extensively, including visits to daughters, solo hike to the bottom of the Grand Canyon, and road trips with Jackie to Alaska and Eastern Canada. When their Fargo home of nearly 30 years was repeatedly threatened by floods, they moved permanently to their log lake home on Island Lake. Soon thereafter they became snowbirds, eventually establishing a winter home in Green Valley, AZ. In all his activities he enjoyed socializing. Peter was a very sweet person with a subtle sense of humor. He leaves a legacy of friends from colleagues at the research lab to neighbors in Fargo, Island Lake, and Green Valley. He will be greatly missed. Peter is survived by his daughters Ann Aschbacher, Madison, WI; Jean (Tim) Yerhot, Chaska, MN; Carol (Mike Thompson) Aschbacher, Minneapolis, MN; grandsons Anthony (Amber) Yerhot, Bloomington, MN; Paul (Amanda) Yerhot, Pine Island, MN; great granddaughters Avery and Amelia Yerhot; sister-in-law JoAnne Aschbacher; numerous nieces and nephews. He is preceded in death by his parents; wife Jacqulene; brother and sister-in-law Francis (Bub) and Helen Aschbacher; sister and brother-in-law Helen and Joseph Szokoli; sister and brother-in-law Jean and Ed Bartheld; brother and sister-in-law James and Patricia Aschbacher; brother Thomas Aschbacher; siblings-in-law Jerome and Lucille Thompson; nephew Phillip Aschbacher; niece Ann Coan Aschbacher. A Mass of Christian Burial will be held at 11 AM on Friday, June 24, 2022 at St. Dennis Catholic Church 505 Dempsey Road Madison, WI. Visitation will be held from 10-11 AM at the church. Internment will be on Saturday, June 25 at 9:15 AM at Roselawn Memorial Park, Madison, WI. Arrangements by Washburn-McReavy in Eden Prairie. In lieu of flowers, donations may be made to the Audubon Society (Fargo- Moorhead Chapter) or Tamarac National Wildlife Refuge.

Peter William Aschbacher, formerly of Fargo, died peacefully at the age of 94 at English Rose Suites in Edina, MN on June 20, 2022. Peter Aschbacher was born on April 20, 1928 in Ashland, WI and was raised on a small dairy farm. After serving... View Obituary & Service Information

The family of Peter William Aschbacher created this Life Tributes page to make it easy to share your memories.

Send flowers to the Aschbacher family.