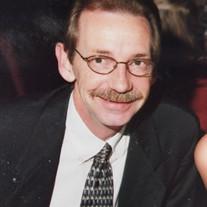 Loving father, grandfather and brother, Paul Pakenham Jr. passed away peacefully at Fairview Hospital in Edina, MN on Friday, May 6 at 7:43 am at the age of 65. He was surrounded by loved ones as he continued on his journey. As a way of cementing his affection for his family, he spoke his final words the day before he left when he repeatedly said "I love you" to his grandchildren before drifting back to sleep. Paul came into the world in Chicago on November 27, 1956 and moved to the Twin Cities at the ripe old age of 4 years old. As a child, he loved spending long hours playing games with his siblings - Monopoly, Canasta, poker, and Sheepshead. Paul attended school at St. Joe's in Hopkins, and he quickly became an outstanding outfielder in baseball and shooter in basketball. He said his coaches, "believed in me and saw things in me others didn't see." This stuck with him throughout his life. After high school, Paul's greatest wish was to get married and have children. He briefly moved to Wisconsin and worked various jobs, including in a grain elevator which gave him the opportunity to later share scary stories with his children of the dog-sized rats he encountered underground. When he returned to Minnesota, he applied for a job as a car parker with a dealership and was instead hired as a car salesman. Paul found he was talented in automotive sales, and enjoyed a successful career winning many accolades. His career came to a halt when the recession of 2008 disrupted the car business. As he balanced work, family and life - his athletics shifted to bowling, golfing and billiards. The most important part of the second half of his life were his children. Many doctors noted in his medical reports that he would state, "My children are everything to me." He enjoyed traditions and routines - taking his family out to eat on Saturday evenings and going to the movie theater on Sundays. One of his favorite annual traditions was hiding Easter Eggs and enjoyed watching his kids speculating on the location of each egg and searching, sometimes unsuccessfully, to find them. Paul loved rock n roll music and brought his children to countless concerts of his favorite musical legends, including Paul McCartney, Elton John, Billy Joel, Pink Floyd, U2, The Monkees, Eric Clapton, Bob Seger, Bruce Springsteen and Heart. He also found joy in making sure to bring his kids to concerts of their favorite current artists. He instilled in his children a love for music that will last generations. Paul could be heard saying his favorite mantras almost on a daily basis, such as "Never trouble trouble till trouble troubles you." When presented with a problem, he would approach it unbothered, as if there was no problem at all. He always believed he could fix anything, even as the shelf he put in place fell off the wall for the third time. He loved teaching his grandkids all of his tricks, from his favorite jokes to the perfect golf swing. As he enjoyed with his own children, Paul never missed a ball game or play featuring his grandkids. He attended every weekend, complete with having a hot dog for lunch on the bleachers, and wished he could have still gone once he was on oxygen, brainstorming ways to watch from the parking lot. His family always knew they would be remembered by Paul every birthday and holiday. Along with his thoughtfulness, he also told those he loved that he was praying for them which may well have prevented numerous calamities from happening; he kept his spiritual beliefs personal and active. In his final years, he realized the value in money was in giving it to those in need, and was proud of himself for learning this lesson. He never had expectations that others needed to return his generosity and always remembered to say thank you. Paul found much pleasure in feeding his loved ones, no matter how recently they insistented they had just eaten. He also relished in sharing his favorite pastime of "eating goodies" with his grandkids despite his own children's protest at how much sugar the little ones had that day. His family will greatly miss going to visit him and finding him relaxing on the couch with his TV remote on his lap, enjoying a glass of milk along with some cookies, brownies, and cupcakes - followed by a big smile on his face when he saw his visitors. Paul was preceded in death by his parents Tillie and Paul Sr. and his sister Kathy Peterson. Paul was survived by his four children - Samantha (Scott), Stephanie, Shaun and Stacey (Andrew); six grandchildren; four siblings - Mary (Dan), Patrick, Mike and Kathy Soltwisch; and mother of his children, Judy. His memorial will be held at Washburn McReavy at 1400 Mainstreet in Hopkins, MN on Friday, June 10. Visitation will take place from 12:00 to 2:00, with service beginning at 2:00. Please join a reception at 3:00 following the service where "goodies" and coffee will be provided to all guests as a celebration of Paul's love and excitement for desserts - and his loved ones.

Loving father, grandfather and brother, Paul Pakenham Jr. passed away peacefully at Fairview Hospital in Edina, MN on Friday, May 6 at 7:43 am at the age of 65. He was surrounded by loved ones as he continued on his journey. As a way of cementing... View Obituary & Service Information

The family of Paul Eugene Pakenham, Jr. created this Life Tributes page to make it easy to share your memories.

Send flowers to the Pakenham family.