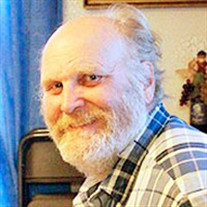 Paul Albert Holmboe, 72, of Minneapolis, MN, passed away peacefully in his sleep on May 9th, 2022. Paul was born on June 20th, 1949 to Janet and Albert Holmboe in St Paul, MN. After Paul graduated from Highland Senior High in 1967, he earned an associate degree from the U of MN. Afterward, he served in the US Army from 1969 to 1971. He was stationed in Germany, which you will notice was not invaded by the Soviets at that time. Could just be a coincidence, but we like to think otherwise. He then worked at a couple of different steel plants until he discovered land surveying. After going back to school he started working for the Scott County Department of Transportation, where he would spend the rest of his working career without ever having to lift heavy pieces of steel. In August of 1975, Paul met Wanda at the Fort Snelling Employee Club. Neither of them was actually an employee of Fort Snelling, but the universe can't be denied what it wants sometimes. After a whirlwind courtship, he told her they were getting married, which they did ten months later in June of 1976. Four children soon followed: Bertine, Jens, Serinia, and Eric. Many of the children are cool, and he loved the ones that aren't just as much as the ones that are. While the kids were of school age, Paul spent much of his time helping with homework. He was a superb math tutor. He was surprisingly good at mental arithmetic and was able to easily multiply five-digit numbers in his head. He spent many hours playing with his children. Legos, puzzles, and board games were a fixture in his house. He also enjoyed the sports his children were involved in. He was twice named Volunteer Of The Year for the local park board. This reflected a life-long love of watching sports of all sorts. He was a Vikings fan but didn't hold their lack of success against them. And 30 years after the Twins victory in the 1991 World Series, every pitch of Game 7 was still fresh in his mind. His greatest love, though, was golf. For many years he was on the greens nearly every weekend the weather permitted. During the week and all winter long, he watched it on TV. He was not picky about this, he enjoyed major tournaments and tiny tournaments featuring people you'd never hear of again. The game itself was what was important to him. He also greatly enjoyed home repair projects, both major and minor. Over the years, he remade much of the house, and when his children bought houses of their own he remade a good portion of those as well. He was an excellent teacher in this regard. He enjoyed complicated projects because they were more likely to require multiple trips to the hardware store. He worked on his popover recipe for years, and they could have been served in any restaurant in the country. Other things he greatly enjoyed include steak, Hershey's chocolate, rom-coms, driving very slowly on surface streets rather than taking the interstate, Diet Coke, Star Trek, flannel shirts, and just letting Wanda run things if she wanted to. In 2015, Paul retired and began supervising home repair projects rather than doing them himself. He and Wanda took trips to Italy, where he was finally able to see both Rome and Pompeii, and a month-long trip to Europe at large. He had four grandchildren, Kethry, Henrietta, Hannah, and Ross. He loved having the children around, and was always ready to sneak them a piece of candy or let them play games on his iPad. Many great naps were had while snuggling in his recliner. Paul was predeceased in death by his parents. He is survived by all of you, as he would have thought would be self-evident but would have enjoyed pointing out anyway. He was a warm and loving husband, father, grandfather, and friend, and we're all going to miss him terribly. A memorial service will be held at Washburn-McReavy Nokomis Park Chapel in Minneapolis on Saturday, May 21st. The visitation will start at 1 pm with the service starting at 2. Masks will be required by the family. In lieu of flowers, the family requests donations be made to the American Red Cross, an organization Paul supported throughout his life. He donated many gallons of blood there over his lifetime. Following the service, there will be a get-together in Jens' backyard, 5748 S 28th Ave, Minneapolis, MN 55417 where food and drink will be served.

Paul Albert Holmboe, 72, of Minneapolis, MN, passed away peacefully in his sleep on May 9th, 2022. Paul was born on June 20th, 1949 to Janet and Albert Holmboe in St Paul, MN. After Paul graduated from Highland Senior High in 1967, he earned... View Obituary & Service Information

The family of Paul Albert Holmboe created this Life Tributes page to make it easy to share your memories.

Send flowers to the Holmboe family.