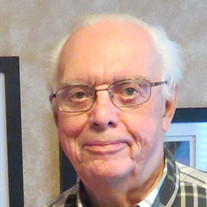 Norman John Werner passed away Oct. 17, 2021, in Coon Rapids. Norm was born Jan. 29, 1926, in Minneapolis to John Emil Arthur Werner and Lydia Anna Werner (née Meyer) of Long Prairie, Minn. Norm grew up in Long Prairie, where he graduated from high school in 1944 and was soon drafted into the U.S. Army to serve in World War II. He was honorably discharged in 1946 and went on to receive an A.A. degree from Bethany Lutheran College in Mankato, Minn., and a B.A. from the University of Minnesota. On July 31, 1955, he married Elizabeth Preus of Calmar, Iowa, and moved to Minneapolis for a short time before moving to Coon Rapids, Minn., where they lived for the remainder of their married life together. Norm spent most of his career as a public servant, working first as Assistant City Manager for the city of Coon Rapids, then for municipal advisory firm Springsted Inc., then for nearly 20 years as a fiscal planner for the Metropolitan Council in St. Paul until he retired in 1994. A man of strong faith, he was a dedicated member of King of Grace Lutheran Church in Golden Valley and of the Evangelical Lutheran Synod, devoting decades of service and skill to both in the areas of planning, missions and governance. A great lover of music and of sports, Norm sang in the King of Grace choir for more than 50 years and remained a devoted fan of the Vikings, Twins, Lynx, and Gophers to the end. Norm is survived by his wife of 66 years, Elizabeth; his children, Karl Werner, Ann Werner, Nancy Schauff (Greg), Marcus (Vi) Werner, Marnie, and John; his grandchildren, Joseph Schauff and Margaret Schauff; and his brother, Paul. Preceding him in death were his parents, John and Lydia. A service will be held Nov. 5, 1 PM with visitation one hour prior, at King of Grace Lutheran Church, 6000 Duluth St., Golden Valley. The family requests everyone to please wear masks. The service will be live-streamed at www.kingofgracelutheran.com. Burial will take place at Fort Snelling at a future date. Memorials can be made to the Evangelical Lutheran Synod, Mankato, Minn.; Bethany Lutheran College, Mankato, Minn.; Thoughts of Faith (tof.org); and the American Humane Society.

The family of Norman John Werner created this Life Tributes page to make it easy to share your memories.

Send flowers to the Werner family.