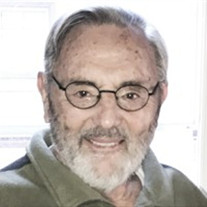 Petrik, Norman D. Norman Petrik, husband, father, grandfather, and a model of community service who always had positive things to say, died on February 10, 2022 shortly after his 87th birthday. He was happy and content with life to the very end. Norm was born in Tyndall, South Dakota on January 16, 1935 to Sylvester and Lillian (Vavruska) Petrik. He was the youngest of six children and left life on the farm for service in the US Army, where he learned Czech, the language of his parents. He subsequently earned a PhD in psychology at the University of Nebraska and spent most of his career as a psychologist at the St. Cloud VA Hospital. Proud of his Czech heritage, Norm took each of his children individually to the Czech Republic to meet family and learn about the country. He also travelled there with his wife, Joyce, for family visits and to participate in cultural events in Prague. Norm devoted the later years of his life to his wife, Joyce Tesarek. They married in 1992 and shared a deep and loving bond. Together they were very active in Czech and Slovak Sokol Minnesota. Norm also was a pilot, loved to cross country ski, and was a champion pinochle player. He taught all of his children to snow and water ski and the value of community and public service. He volunteered for many years with the Twin Cities Men's Center, Mended Hearts, the American Legion, Common Cause, and Lake Nokomis Presbyterian Church. Norm was a kind, gentle man, and will be missed greatly by his family. He is survived by his wife Joyce Tesarek, first wife Marjorie Schramm; children Dan Petrik (Mark Bisignani), Julie Petrik (Ian Lyngklip), and Rebecca Olson (William Olson); and grandchildren Kyra Lyngklip (Ethan Anderson), Laurel Lyngklip, Rachel Olson, Nicholas Olson, and Benjamin Olson. A funeral service for immediate family only will be held on 2/26/22 at Lake Nokomis Presbyterian Church in Minneapolis. Memorials, in lieu of flowers, may be sent to Czech and Slovak Sokol MN or Lake Nokomis Presbyterian Church.

Petrik, Norman D. Norman Petrik, husband, father, grandfather, and a model of community service who always had positive things to say, died on February 10, 2022 shortly after his 87th birthday. He was happy and content with life to the very... View Obituary & Service Information

The family of Norman Dale Petrik created this Life Tributes page to make it easy to share your memories.

Send flowers to the Petrik family.