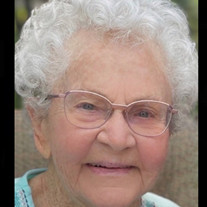 Norma LaMae (Flaig) Hart, age 96, passed away Sunday, May 1st 2022, at her residence in Andover, MN. She was born November 17th, 1925 to Oliver and Ella Flaig. She spent her childhood in Sanborn, MN. After high school she moved to Mankato to attend college. Following college she moved to Minneapolis, where on a blind date she met her future husband, Bud. They were married October 4th, 1947 and went on to have 4 children. While raising her family in Columbia Heights she worked at local businesses including Jerry's Bakery and Northrup-King Seed Company. Norma enjoyed vacationing each summer with her family at Voyager Village in northern Minnesota. As the children grew older, she also enjoyed traveling to various countries with Bud. They ultimately decided to retire in Florida, where she resided until 2019. In Florida she worked at the Post office, Publix, The Biltmore Hotel, and spent many years volunteering at the local hospital. When she wasn't working, she could be found cruising the ocean as captain of 'The LaMae'. Her favorite pastimes included tending to her plants, watching sunsets, and looking forward to her many visits from family and friends. Norma was preceded in death by her husband, Robert W. Hart; son, Jack L. Hart; grandson, Barry G. Pankonin; great-granddaughter, Charlotte L. Pederson; sister, Lotus (Flaig) Juhnke; and brother, Gerald Flaig. Norma is survived by her children, Judy (Wayne) Pankonin, Jane (Tim) Gaynor, and Jerry Hart; son Jack's partner, Jeff Lamberg; grandchildren, Christy Jackson, Brad (Marcia) Pankonin, Lisa (Steve) Mettler, Carrie (Phil) Pederson, Eric (Alyson) Kent, Jordan (Sean) Hart-Anderson, and Jesse (Steph) Hart; and 15 great-grandchildren. She was most recently quoted as saying "Who would have thought a small farm town girl like me would go on to have a great life and see so much of the world". She will be greatly missed by all.

Norma LaMae (Flaig) Hart, age 96, passed away Sunday, May 1st 2022, at her residence in Andover, MN. She was born November 17th, 1925 to Oliver and Ella Flaig. She spent her childhood in Sanborn, MN. After high school she moved to Mankato... View Obituary & Service Information

The family of Norma LaMae Hart created this Life Tributes page to make it easy to share your memories.

Send flowers to the Hart family.