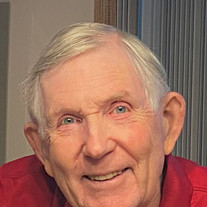 Melvin (Mel) Dean Larson, 85, of Shoreview, MN went to be with his Savior on November 9, 2021 after a short time in hospice care due to cancer. Mel was born to Axel and Hannah Larson on June 18, 1936 in Turlock, CA. His family later moved to Minneapolis, MN where he grew up. On June 22, 1957 he married Margaret (Peg) Kellogg. Mel served in the U.S. Army from 1959-1961 in Ft Riley, KS. Shortly thereafter, he and Peg moved back to Minneapolis where he began his career as a funeral director; a profession in which he selflessly served for nearly 60 years. Mel was known for his gentle, caring manner and his uncompromising attention to detail as he worked with families in their greatest time of need. Peg and Mel were married for nearly 60 years. Following the passing of his wife, Peg, in 2016, he married Sandy Hanna, with whom he spent his remaining years. Mel loved being with family and friends. He enjoyed traveling and spending time outdoors. He especially liked to fish. His life was characterized by a selfless willingness to serve; always putting the needs of others before himself. He was a fun-loving man with a dry sense of humor; he never forgot a joke and enjoyed making people laugh. Most importantly, Mel was a man who knew his Lord and Savior, Jesus Christ. All who knew Mel, knew the strength of his faith and the eternal hope to which he held firm throughout his life. He is survived by his wife Sandy Hanna Larson and his daughters Ronda (Brian) Underwood and Sonja (Byron) Johnson; Grandsons Eric (Taylor) Underwood and Ben Johnson; Granddaughter, Eliya Johnson and Great-Grandsons, Mason, Colton and Austin Underwood. Mel is also survived by Sandy's son, Scott (Brenda) Linder and his children, Kai, Lars and Maja Linder, daughter Kristin Linder and her son, Nathan Tollefson and daughter, Heather Tollefson. In Lieu of flowers memorials preferred to Samaritan's Purse. LIVE STEAM INSTRUCTION: Go to North Hts website: northheights.church click onto: Watch Live (will show) Arden Hills Roseville click onto: Roseville

Melvin (Mel) Dean Larson, 85, of Shoreview, MN went to be with his Savior on November 9, 2021 after a short time in hospice care due to cancer. Mel was born to Axel and Hannah Larson on June 18, 1936 in Turlock, CA. His family later moved... View Obituary & Service Information

The family of Melvin Dean Larson created this Life Tributes page to make it easy to share your memories.

Send flowers to the Larson family.