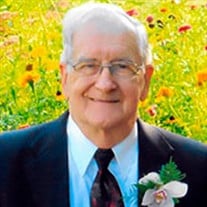 Boettcher, Melvin E. 94, died on February 1, 2022. He was born January 14, 1928 in Stacy, MN, growing up on the family farm and graduating from Forest Lake High School. At Dunwoody Institute, he trained in mechanical drafting and design. He attended night school obtaining a senior engineering certificate from the University of Minnesota. He also earned his boiler license and completed training as an emergency medical technician (EMT). Mel worked at Minneapolis-Moline during which time he was drafted into the Army in 1950. While at Pako Corp. he became a plant engineer. He was active in the Twin City chapter of the American Institute of Plant Engineers (AIPE) serving a term as president. He later worked for R.L. Johnson Investment, Honeywell's SSED division and retired from the Hennepin County Service Center in Brooklyn Center. In 1952, he married Yvonne Sigman. They and their 3 children resided in Plymouth, MN. They built and maintained their home for 64 years. The last two years he resided at Heathers Manor, Crystal, MN. At a young age, he recognized the value of serving his Heavenly Father and was later privileged to have a Christian fellowship meeting in the home for many years. He enjoyed fishing, snowmobiling, antique tractor shows, international travel, woodworking, building clocks and making chocolate chip cookies. Mel is survived by wife Yvonne, son Roger (Linda), daughters Sandra and Darlene; granddaughter Elisa, grandsons Colin (Eva) and Karl (Anna); great-grandsons Michael and Logan; sister-in-law Fern plus nieces and nephews. He was preceded in death by parents Julius A. & Alma (Kriesal) Boettcher, and two brothers Eugene and Vernon. Interment Glen Haven Cemetery. Funeral service with livestream available at Washburn- McReavy.com on Thursday, 2/10/22, 2 PM with visitation 1 hour prior to service at: Washburn-McReavy.com Glen Haven Chapel 763-533-8643 5125 W. Broadway, Crystal

Boettcher, Melvin E. 94, died on February 1, 2022. He was born January 14, 1928 in Stacy, MN, growing up on the family farm and graduating from Forest Lake High School. At Dunwoody Institute, he trained in mechanical drafting and design. He... View Obituary & Service Information

The family of Melvin Erwin Boettcher created this Life Tributes page to make it easy to share your memories.

Send flowers to the Boettcher family.