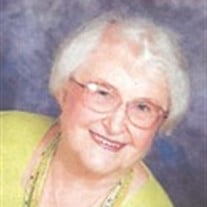 Mary Ann Johnson was born April 12, 1929, in Sioux Falls, South Dakota, daughter of Palmer and Bergliot (Quittem) Krogstad. She spent her growing up years active in the many organizations of East Side Lutheran Church where she was baptized and confirmed and began her life-long journey of faith. She was also active in Girl Scouts and took accordion lessons from Myron Floren (of the Lawrence Welk show). Mary Ann graduated from Washington High School in Sioux Falls, then worked two years as a telephone operator ("number please") before moving to Minneapolis to attend Fairview Hospital School of Nursing from 1948-1951. In Minneapolis she met Richard Irving Johnson at a Student Missionary Conference while he attended St. Olaf College. They were married August 25, 1951, and both attended Bethany College of Missions, finishing in 1953. Richard was ordained as a minister by Bethany Fellowship and they spent the next several years serving churches in Friendship, N.Y., St. Paul, MN, and Sand Creek, WI. They were blessed with 3 daughters--Diana 1953, followed by Janelle in 1957 and Marlene in 1961. Mary Ann worked part time as a registered nurse in various hospitals and nursing homes and operated a small home care service "Jill of All Trades", working mainly at Presbyterian Homes in Bloomington, MN and in the condo complex where she lived. She enjoyed crafts, sewing, semi-classical and Big-Band music, activities at church, and attending open houses on Tuesdays at "Minderkirken" (Norwegian Lutheran Memorial Church). Mary Ann drew drew strength and happiness from her many friends and her large, close family, including 8 grandchildren, 26 great-grandchildren, and 3 great-great grandchildren. She also enjoyed various trips, including to Nassau, St. Thomas, St. Croix and Puerto Rico, an Alaskan Cruise, and a 7-week trip to Scotland and England where her daughter Marlene and family were living. Mary Ann was a dedicated caregiver and nurse to her father, Palmer, after her mother's death. She also cared for her husband Richard as he became ill with Parkinson's disease the last 20 years of his life, until he passed in 1998. She survived a bout of colon cancer in 1998 after surgery and chemotherapy, and years later she also survived 7 years with lung cancer, taking treatments and drawing on her strength and faith. Mary Ann attributes her Christian walk to our Lord, His Word, dedicated Sunday School teachers and pastors, to the example of her mother's life, and to her dear husband. One of her favorite sayings was: "I slept and dreamt that life was joy. I awoke and saw that life was duty. I acted and behold, duty was joy." (Tagore)

Mary Ann Johnson was born April 12, 1929, in Sioux Falls, South Dakota, daughter of Palmer and Bergliot (Quittem) Krogstad. She spent her growing up years active in the many organizations of East Side Lutheran Church where she was baptized and... View Obituary & Service Information

The family of Mary Ann Johnson created this Life Tributes page to make it easy to share your memories.