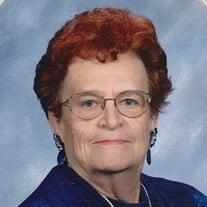 The journey is over but the GREAT journey has just begun. While you're reading this and wondering how to spend the day, the decision has been made for me. This appointment was not on my schedule for today. I had many more books to read, card games to play, lunches to enjoy, St. Patrick's Days to celebrate, friends to be with, and above all, more meetings to go to. God has a sense of humor. My life has been great. My kids have done me proud and it seems we have started a dynasty. The Lewis dynasty will go on to great things, I know. Have a great Irish wake for me. No tears - just fun. Party hearty. And when all the pontificating and ceremonies are over, do one thing for me. Celebrate life!!! I'll see you all again some day. Bet you're hoping it's not too soon. See ya! Mary Jane Lewis, age 92, passed away on October 13, 2021. She was born in Duluth MN to Blaine and Elizabeth Sidders on 9/16/29. She graduated from Duluth Cathedral High School in 1946 and moved to Minneapolis where she met and married Jim Lewis in January 1947. Her major career was 18 years as an Executive Assistant in the Chemistry Department of the University of Minnesota where she was noted for decorating her office for holidays. In 1992 they moved to Longville MN on Lake Inguadona. Mary Jane was past president of the VFW Auxiliary and Young-at-Heart Club, President of the Friends of the Library Board, and continued to be active on the Longville Lakes Clinic Board, The Community Education Committee and the CCW at St. Edward's Catholic Church. She also was Secretary/Treasurer of the WLBICR Lakes Assn for many years and for 14 years the Clerk of Inguadona Twp. She was an emcee at many style shows and celebrations and was known for her jokes. She was a proud and active member of Emotions Anonymous for 39 years. It was her joy to be a lector and a Eucharistic Minister of Communion at St. Edward's. One son, Jim, brothers Patrick and Jim Sidders, grandson, Jamie, as well as her parents preceded her in death. Survivors include sons Terry Patrick (Sandy) Fridley, and Brian Charles (Shelly) Woodbury, Elizabeth Sidders and Barbara Sidders and Judy Tilsen. Grandchildren: Sean, Meghan, Dominic, Shannon, Kelly, Tanya, Jolene and Makayla. Great-grandchildren: Kade, Ashley, Devin, Kaitlyn, Alyssa, Jordyn, Casey, Ariana, Jovan, Jaeden, Kody James, Allanna, Kai, Bennett and Emma. Great-great grandchild: Finnley. Her best friend, husband Jim, preceded her in death in December 2006. Services will be on Thursday, November 4, 2021, at Immaculate Conception Catholic Church in Columbia Heights, MN. Visitation will be held from 9:30-10:30am followed by 10:30 Mass and luncheon.

The journey is over but the GREAT journey has just begun. While you're reading this and wondering how to spend the day, the decision has been made for me. This appointment was not on my schedule for today. I had many more books to read, card... View Obituary & Service Information

The family of Mary Jane Lewis created this Life Tributes page to make it easy to share your memories.

The journey is over but the GREAT journey has just begun. While...

Send flowers to the Lewis family.