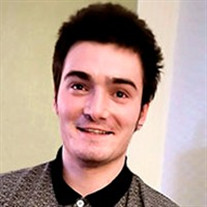 Scalici, Martin Robert born November 8, 2000, passed away May 4, 2022, in Minneapolis, Minnesota at the age of 21. As a young boy, it became apparent that Martin had great abilities for reading, art, mathematics, and science. It also became apparent that Martin would have difficulties in certain social situations-he was diagnosed with autism spectrum disorder. Despite the significant challenges autism posed, Martin excelled academically and in endeavors requiring technical expertise. In his teens, Martin became an accomplished athlete and musician. He excelled in gymnastics; by age 16 he rose to USAG Level 8 and competed in local and regional competitions. Martin played soccer and basketball in high school and was an avid skateboarder. Martin learned how to play guitar when he was younger but dramatically elevated his abilities as a teenager, learning complicated chord structures, lead solos, and improvisation at a highly technical level in multiple styles of music, including blues, rock, and jazz. Martin also wrote lyrics and recorded original songs, and was adept at recording techniques and engineering. He was a natural musician; although he took some lessons, he was mainly self-taught and learned and played by ear. He worked on his craft daily often for hours on end to achieve his technical skills. He also learned to play bass guitar, keyboard, and drums. Martin played in numerous bands, including the jazz band in high school at St. Louis Park, and rock bands with friends. Martin met many musicians and new friends in his senior year when he attended Perpich Arts High School in 2018-2019. Martin loved being able to practice music while at school, but, perhaps most importantly, he found a genuine group of friends. After years of struggling to fit in, the environment and students at Perpich was perfect for Martin. It was a comforting relief to his family to see Martin happy, growing with a network of friends who accepted him. In the fall of 2019, Martin began the Construction Electrician program at Anoka Technical College. Martin's technical prowess made studying electricity easy, and he was an honor roll student. Unfortunately, in 2021 Martin was not able to finish his two-year program-he had become addicted to opioids, and his studies, and life, were derailed by the disease. To be sure, Martin could be quirky, but that often was part of his appeal. He was a practical joker in his own offbeat way and brought laughter to his friends and family. Martin sometimes became obsessed to collect certain things-this driven focus is common in people on the autism spectrum. Most recently, this led him to own dozens of high-end raw denim jeans and jackets. Martin had a sense for style in his dress. Martin had a beautiful, alluring smile; with his handsome looks, intelligence, and talent, he was popular, even if he did not appreciate that fact. Martin had a passion for fishing, and the outdoors. He and his family had many fishing trips to Northern Minnesota. Martin was always up for fishing with his brothers. He often kept fishing on the dock after hours of fishing on the boat. Martin's persistence paid off-he often caught the most fish! Martin also loved animals and animals loved him. The family pets (over the years, including cats, dogs, and a bird) always intrigued Martin and he shared affection with them. Martin was unique, complex, and loving, and often misunderstood. Although he experienced the world differently than the non-neurologically divergent population, he was a vital part of it for all of us that were privileged to know him. Martin's mother advocated for him fiercely and unconditionally all his life. Martin's father always reached out to Martin to lend his support. Martin's sister was his closest friend and confidant. He will be dearly missed by all his family and friends. Preceded in death by grandfather Osvaldo Scalici; step-grandmother Mae Sheehy, her son, John Patrick Sheehy, her daughter, Nythar (Katherine) Sheehy, her grandson, Christopher Halle, and her son in law, Lyle Wittsack. Survived by his father Bruno Scalici (Anne Burnett); his mother Leah Sheehy and stepfather James Sheehy; sister Audrey-Anna Scalici; brother John Francis Sheehy; step brothers Emmett and Robert Sheehy; grandparents Robert and Marcia Erickson; grandmother Cristina Torres; cousins Grant and Curt Erickson, Gioia and Gloria Scalici; nephew Sergio Scalici; uncles Dave Erickson (Katherine), Giovanni Scalici (Katerina), and Guglielmo Scalici (Concetta); and many, many more cousins, aunts and uncles of his step-family. Funeral service will be held on May 16th at 11:00 a.m. at Mount Olivet Lutheran Church, with visitation beginning at 10:00 a.m. with interment at 2:00p.m. at Lakewood Cemetery Memorial Mausoleum. Donations to Fraser Child and Family Center (https://www.fraser.org/donate) in lieu of flowers.

Scalici, Martin Robert born November 8, 2000, passed away May 4, 2022, in Minneapolis, Minnesota at the age of 21. As a young boy, it became apparent that Martin had great abilities for reading, art, mathematics, and science. It also became... View Obituary & Service Information

The family of Martin Robert Scalici created this Life Tributes page to make it easy to share your memories.

Send flowers to the Scalici family.