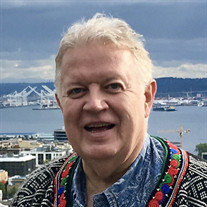 Mark George Harstad, 68, of Golden Valley, formerly of Honolulu, HI, died Saturday, March 26, 2022, at Covenant Living Care Center in Golden Valley. Mark George Harstad was born to Pastor Norman and Martha (Thorpe) Harstad on January 13, 1954, in Granite Falls, MN. He was baptized at Our Savior's Lutheran Church in Belview and confirmed at Penfield Lutheran Church in Rochester, NY. Mark attended Belview Elementary School, later moving with his family to Rochester, NY where he graduated from Penfield High School in 1972. Mark attended Albion College in Albion, MI and graduated from the University of Wisconsin - Madison in 1976, earning a BS in Industrial Engineering. He completed a Master of Science degree in Operations Research in 1984 from the University of California at Berkeley, CA. After college, Mark worked as an Industrial Engineer for the Naval Telecommunications Command in Washington, DC and as an Industrial Engineer at the Navy Manpower/Material Analysis Center in San Diego, CA. In 1984, Mark moved to Honolulu, HI where he worked as an Industrial Engineer for the Navy Manpower Detachment and as an Operations Research Analyst for the US Pacific Command and the Asia-Pacific Center for Security Studies, part of the Federal Department of Defense. During his career, Mark attended the US Army War College in Carlisle, PA, where he earned an additional master's degree (Strategic Studies). He retired in 2009. Due to complications of Parkinson's Disease, Mark moved from Honolulu to Golden Valley in 2019 to be near his family. Mark was the fun uncle and enjoyed watching his nieces and nephews grow up. He enjoyed reading and was a collector of books. He loved doing research and was his family's genealogist, concentrating on his Norwegian ancestry and Lutheran heritage. He was preceded in death by his father, Norman Harstad, and mother, Martha Harstad, and brother-in-law Charles Ball. Mark is survived by his siblings: Joan Ball of Surprise, AZ; Craig (Heidi) Harstad of Sussex, WI; Gail Schuster of Columbia, MO; Ralph (Beth) Harstad of Penfield, NY; Ann Hengel (Tim Larson) of Minneapolis, Judy (Blaine) Field of Spicer, and Carol (Barry) of Sun Lakes, AZ and 18 beloved nieces and nephews and 8 great nieces and nephews. His funeral service will be at 2:00 pm on Thursday, March 31, at King of Grace Lutheran Church in Golden Valley. Visitation will be at the church one hour prior to the service. Burial will be in Mount Hope Cemetery in Ashland, WI.

The family of Mark George Harstad created this Life Tributes page to make it easy to share your memories.

Send flowers to the Harstad family.