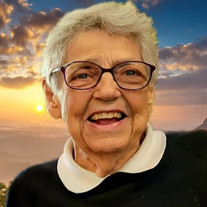 Marjorie Luise (Hanson) Meester September 21, 1924 - January 29, 2022 Marjorie was born in Adrian, Minnesota September 21, 1924, the daughter of Oscar and Charlotte (Johnson) Hanson. She had one brother, Robert. She grew up on a farm 12 miles South of Adrian. She attended Augustana College in Sioux Falls, South Dakota where she met her one true love Judd Meester. With his education interrupted by WW II, Marge graduated with a BA in English and a teaching certificate. She took a position teaching English, French as well as directing the school plays at Valley Springs, Minnesota. She and Judd were married in 1946. They moved to Minneapolis while Judd finished his degree at the University of Minnesota. They moved to Des Moines, Iowa where Judd went to work for Meredith Publishing. While in Des Moines she gave birth to Mark in 1949 and two years later a 2nd son, Eric, was born. Shortly after that the family moved to Edina, Minnesota. November 1955 brought the family a wonderful surprise, the Triplets, Alan, Mary and Beth were born. Marjorie was an active member of the Lutheran Church of the Good Shepherd, volunteered at the U of M Landscape Arboretum, and the local garden club, while raising two active boys and a set of triplets. Marjorie was an avid reader and piano player and filled the Meester home with a love of music and books. She loved knitting. She supplied family and friends with warm mittens, sweaters and afghans. She was a member of the Good Shepherd Quilters and the Lady Slipper Thimblers of Minnesota. Most cherished by all the were the Saturday mornings around the kitchen table drinking coffee and passing around the morning paper crossword puzzles and discussing nothing important but enjoying the closeness of family. Marjorie was preceded in death by her parents Oscar and Charlotte (Johnson), husband Judd and brother Robert. She survived by her sons Mark (Sheila Hart), International Falls, MN, Eric, Chanhassen, MN, Alan (Cindy) Plymouth, MN, daughters Mary, Minneapolis, MN, Beth, Eden Prairie, MN, grandchildren Nick (Nikki), Mound, MN, Alex, Plymouth, MN, Matt Keleher, Apple Valley, MN, David Keleher (Allison), Minnetonka, MN, Anthony, Woodbury, MN, great-grandchildren Brooke, Quinn Keleher. And numerous nieces, nephews and friends. Memorials preferred to the University of Minnesota Landscape Arboretum To Livestream this service please go to: http://www.goodshepherdmpls.org/marge

Marjorie Luise (Hanson) Meester September 21, 1924 - January 29, 2022 Marjorie was born in Adrian, Minnesota September 21, 1924, the daughter of Oscar and Charlotte (Johnson) Hanson. She had one brother, Robert. She grew up on a farm 12 miles... View Obituary & Service Information

The family of Marjorie Meester created this Life Tributes page to make it easy to share your memories.

Send flowers to the Meester family.