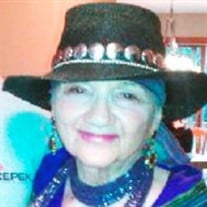 Pierce, Marion Margaret age 90, passed away peacefully on February 20, 2022, surrounded by her three beloved grand- children. She was born Marion Margaret Bissonette on December 14, 1931, in Waite Park, Minnesota, to parents Joseph and Margaret. She moved to Minneapolis where she married Jack Pierce, and gave birth to her children John and Catherine. Unfortunately, John preceded her in death at the age of 16. Marion worked for the telephone company, as well as many years as a waitress at the Nankin and Café DiNapoli (where she was known as Biz). Marion is fondly remembered by all for her infectious humor and spirit of service towards others. She was well known in the Uptown area of Minneapolis, where her distinctive style of beautiful scarves and dangly earrings made her shine not to mention her downright rare personality. Among Marion's qualities, the most evident may have been her giving nature. There were multiple occasions when, literally, she gave the clothes off her back (sometimes to perfect strangers). She loved to write people beautiful cards and give a myriad of ornate things. Marion devoted time volunteering as a young adult and, while in her 70s, to Walker Methodist in Minneapolis. She spent all of her days thinking of her grandchildren John, Rachel, and Grace MacLaughlin, who always referred to her as Grandma Gertie. She was a fierce protector and advocate for all, but especially her grandchildren. She was adored by each of them, her daughter, son-in-law, as well as anyone lucky enough to cross paths with her in life. However overused the phrase may be, she was the epitome of a one-in-a-million. Memorials preferred to Mom's favorite charity: St. Jude Children's Research Hospital. Washburn-McReavy.com Hillside Chapel 612-781-1999

The family of Marion Margaret Pierce created this Life Tributes page to make it easy to share your memories.

Send flowers to the Pierce family.