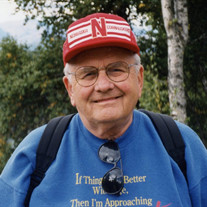 Marion Roy Freed was born on September 8, 1930, the first member of his family to be born in the brand-new hospital in Holdrege, NE. He grew up on a farm near Loomis, NE and graduated as his high-school salutatorian in 1948. In 1951, he was drafted into the US Army to serve in the Korean War. After contracting tuberculosis in Korea, he spent a year recovering back in the States and was discharged from the army hospital at Camp Carson, CO. When his health wouldn't allow him to return to farming, he went to college on the GI bill at the University of Nebraska-Lincoln, graduating with his bachelors degree in 1957 and a Masters degree in Agricultural Economics in 1958. He had his first date with his wife Connie after they met through mutual friends in 1955, and were married August 11, 1956 in her hometown of Yutan, NE. Upon graduation, Marion was immediately hired by the Omaha office of the Prudential Insurance Company, in their mortgage loan division. He spent almost 35 years with Pru, retiring in 1991 to form the Freed-Mott company with his Prudential colleague Dan Mott. Three years later, Freed-Mott sold to Towle Co. of Minneapolis, and he spent his remaining working years with Towle. Marion went from farm loans to residential loans to commercial real estate, working in the loan business for 45 years, and loving every minute of it. He loved going to work every day, especially getting out in the field and visiting clients all over his beloved Midwest. In retirement, he volunteered at the VA Hospital for 15 years, and delivered Meals on Wheels with his wife Connie for many years as well. He was a devout Christian. In late 2019, Marion was honored to be included on an Honor Flight to Washington DC with fellow veterans, touring war memorials and Arlington National Cemetery with his son Russ. Marion was a St. Louis Cardinals fan through and through, stemming from his years growing up in central Nebraska where they were the closest team he could raise on the radio. He also loved his Nebraska football team, and developed a lifelong attachment to the Boston Celtics. Marion loved his family, and was so beloved by them in return. He was so proud of each of his 11 grandchildren, and remained interested in their lives throughout his years, always asking questions and staying in touch with their activities. Marion was an inveterate traveler. He had a knack for making connections with people, always starting with "Where are you from?" No matter the answer, he could connect it to his travels, his work, or family he had in the area. Marion was preceded in death by his parents Roy and Ellen (Johnson) Freed; brother and sister-in-law Donald and Mary Louise Freed; and brother-in-law Ken Seeman. He is survived by his wife of 65 years Connie (Peters) Freed; sons Russ (Tami) and Curt (Pam) Freed; daughters Sue (Jeff) Pape and Katy (Rob) Epler; and grandchildren Brittany (Nate) Erickson, Shannon Freed, and Gretchen (Tyler) Krienke; Ryan and Carissa Freed; Elizabeth, John, Scott (fiancée Brittany), and Andrew Pape; and Will and Josie Epler. He is also survived by his beloved sister Colene (Freed) Seeman, many nieces, nephews, and cousins; and countless friends nationwide. In lieu of flowers, memorials preferred to STEP (https://stepslp.org/) or Wooddale Church (https://wooddale.org/). Funeral service will be held on Monday, October 18th at 10AM with visitation one hour prior at Wooddale Church, 6630 Shady Oak Road, Eden Prairie. Visitation also on Sunday, October 17th from 4PM to 7PM, at Washburn-McReavy Edina Chapel.

Marion Roy Freed was born on September 8, 1930, the first member of his family to be born in the brand-new hospital in Holdrege, NE. He grew up on a farm near Loomis, NE and graduated as his high-school salutatorian in 1948. In 1951, he was... View Obituary & Service Information

The family of Marion Roy Freed created this Life Tributes page to make it easy to share your memories.

Send flowers to the Freed family.