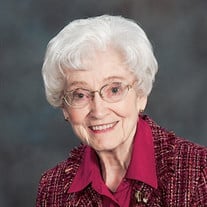 Marilyn Ann Patterson October 23, 1928 - October 23, 2021 Marilyn Ann (Cross) Patterson of Eden Prairie, Minnesota died on October 23, 2021. She is preceded in death by her parents Harry and Myrtle (Rasmussen) Cross, and her husband of 56 years Richard L. Patterson. She is survived by her sister Gracia (Cross) Kettelkamp (Wes, Deceased), daughters Merri Lee (Gary) Hipp, Carolyn (Gary) Setterberg, Laurie (Andy) Brown, sons Richard Patterson, Matthew (Chris) Patterson, grandchildren Carissa (Jeff) Barden and Samuel Hipp, Collin (Katie) Setterberg, Drew (Sophia) Setterberg, Gwendolyn (David) Collao, Laurilee (Colin) Tracy, Karli and Shelbi Patterson, and Max, Jack and Emma Patterson. Marilyn has 8 great-grandchildren and many dear nieces, nephews and cousins. Marilyn was born on October 23, 1928 in Minneapolis, MN. Gracia, her beloved sister arrived when Marilyn was almost 8. At the age of 10, Marilyn gave her life to the Lord through the ministry of Grace Baptist Church and her Sunday School teacher. Marilyn was a gifted musician, learning to play the piano, organ, and singing as a soloist in choirs and small groups. She was the church organist for many years in the 1960's and 70's at Hillside Church (then Bloomington Baptist). Marilyn loved attending and serving at church! She taught Sunday school, directed Jr. Choir, and was involved in Bible studies and deaconess ministries. Marilyn graduated from Roosevelt High school, Minneapolis in 1946. She entered Bethel College in St. Paul, Minnesota that fall, and then transferred to Mounds Midway School of Nursing in 1948. She graduated in 1951 as a Registered Nurse. Her fellow nursing classmates became dear friends. Marilyn enjoyed reunions throughout the years and participated eagerly in class gatherings. In her 50's, Marilyn went back to school for her B.A. and an advanced nursing degree. She briefly served as a Nurse Practitioner in a women's clinic in Bloomington. Marilyn met her husband Richard at Grace Baptist in 1948 while he was attending dental school at the University of Minnesota. They married in 1951. Other than a year in Spring Lake Park followed by a year in New Jersey where Richard served in the Coast Guard, they lived in Bloomington and Eden Prairie Minnesota their entire marriage. Their five children were born between 1953 and 1967. Richard and Marilyn started travelling to other countries in 1963 as short-term dental missionaries. These trips changed from doing dentistry to implementing Christian community development in Africa, beginning in Uganda. They started Mission: Moving Mountains in 1979. Over the years, Marilyn ministered in Africa, prayed for the work, and hosted many missionaries in their home. When Richard joined the missions department at Grace Church, Eden Prairie in 2000, Marilyn became Richard's ministry partner, making many trips all over the world as they visited and encouraged Grace Church missionaries. Marilyn loved ministering with women and was involved in the Titus 2 mentoring program at Grace Church. She also enjoyed studying God's Word both in Bible Study Fellowship and at church. She loved prayer meetings and intercession for missionaries. She was deeply committed to Scripture memory. She also volunteered at New Life Services Crisis Pregnancy Center, visited shut-ins, and served on the Missions Outreach committee. Marilyn lost her beloved life-partner in 2007. She moved from their Eden Prairie home to Summit Place in 2013. Around 2015, Marilyn started showing signs of dementia. In 2018 she moved from Summit Place to Becky's Place in Eden Prairie where she received kind and attentive care by the amazing staff and by the Park Nicollet Hospice team. She was also lovingly attended by her dear niece Christine Woodard, who served her and kept the family apprised of Marilyn's needs throughout these years. On October 23, her 93rd birthday, Marilyn took her last breath on earth and entered eternal Life with her Lord and Savior Jesus Christ. She heard the precious words, "Well done, Good and Faithful Servant!" We say thank you to Jesus for bringing His work in Marilyn to completion and welcoming her home! In lieu of flowers, Memorials preferred to Grace Church Eden Prairie Missionary Support or The Navigators - Discipling for Development. Interment at Ft Snelling Cemetery. Service is 11:30AM, Thursday, Nov 4 with visitation at 10AM at Grace Church, 9301 Eden Prairie Rd, Eden Prairie. Wasbhurn-McReavy.com Eden Prairie Chapel 952-975-0400

The family of Marilyn Ann Patterson created this Life Tributes page to make it easy to share your memories.

Send flowers to the Patterson family.