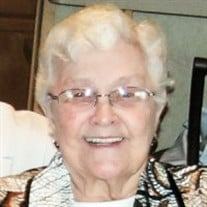 Marian (Mar) was the first-born child of 8 to Alice and Ragner Olson. She was born and resided in Eveleth, MN until 5 when her parents, sister, and brother moved to Gilbert. She graduated from Gilbert High School in 1942. After high school Marian left the Iron Range and moved often for various jobs. From 1942-1949 Marian worked in Minneapolis, Duluth, Virginia, at Lake Kabetogma and in Detroit, MI. She lived in Detroit for several years before coming back to Minneapolis in 1949 where she was fortunate to find work at the Commodity Credit Corporation in the typing pool. At Commodity, Marian became friends with her future sister-in-law Marge, who introduced her to Harvey (Harv) Wickman. He had returned to Minneapolis after serving 6½ years in the Navy. Marian and Harvey were married May 27,1950. The couple purchased a home in Bloomington in 1952 where their children, Diane and Brian were born. They lived there until 1955 when they purchased another home nearby. Mar and Harv made many friends and raised their children in that home for 24 years. Mar enjoyed being a homemaker until 1964 when she returned to work as a waitress at Bridgeman's, where her sister Joyce worked and later Diane and numerous nieces and nephews were employed. In 1974 Mar and Harv moved to Perham, MN on Little MacDonald Lake where they worked together in building their new home. These were good years for them as they enjoyed fishing, boating, waterskiing and gardening. Friends and family received frozen beans and carrots, as well as canned tomatoes, beets, and pickles to eat while visiting and to take home! In Perham, Mar and Harv were active in the VFW where Marian served as the auxiliary president for 7 years. Throughout her life, Marian was a tireless and fantastic cook. Like her mother, Marian always had plenty of baked goods on hand, including cinnamon rolls, cookies, bread, and at Christmas time Julekake and Fatiman. Fatiman was often made with sister Joyce until Joyce's sudden passing in 2002. When living at the lake became difficult, Mar and Harv moved to a townhome in Blaine in 1999. After Harvey passed away in 2003 Marian was lonely and moved to Savannah Oaks Senior Living in Ramsey. Marian was a well loved resident at Savannah Oaks, where she was again known for cooking and baking, as well as her humor, jokes, friendships, and love of happy hour and coffee gatherings. When her dementia progressed, Marian moved to assisted living at Crestview in February 2018, and a little over a year later moved to memory care. At Crestview her family was told how much she was liked and many staff members called her "mama". Staff also noted that Marian could be quite humorous, but also a little cynical and mischievous! Marian was a devoted wife, mother, grandmother, friend and the fun-loving matriarch to the extended Olson family for 26 years after her mother's death. She and her siblings were proud Norwegians! Marian was preceded in death by parents, Alice and Ragner Olson; husband Harvey; sister Joyce and brothers Harold, Floyd, Ralph, Robert, and Richard; brothers in-law Gordon Wickman and Marvin Kaiser; sisters-in-law Reenie and Carol Olson, and Marge Wickman. She is survived by brother, Melvin; daughter Diane and son Brian (Peggy); grandchildren Nathan (Andrea), Tanya, and Tyler; 6 great grandchildren; and 1 great-great grandchild. Also survived by sisters-in law Betty and Marlys Olson, many nieces, nephews, and other family and friends. Marian's children wishes to give special thanks to her "in-town niece" Karen DeAnn and the caregivers at Crestview and Allina Hospice.

Marian (Mar) was the first-born child of 8 to Alice and Ragner Olson. She was born and resided in Eveleth, MN until 5 when her parents, sister, and brother moved to Gilbert. She graduated from Gilbert High School in 1942. After high school Marian... View Obituary & Service Information

The family of Marian Lois Wickman created this Life Tributes page to make it easy to share your memories.

Marian (Mar) was the first-born child of 8 to Alice and Ragner...

Send flowers to the Wickman family.