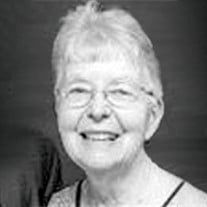 Hansen, Diane Barrington 82, of Eden Prairie, MN died Dec. 7, 2021, after seven years battling lung cancer. She was born Dec. 27, 1938, in Kansas City, MO, graduated from Pasadena High School (Pasadena, CA) in 1956 and, three years later, from Occidental College (Los Angeles, CA) with a major in elementary education. She taught second grade for several years and, after her first husband died, married Jerry Hansen on August 9th, 1965. They celebrated their 56th wedding anniversary this year. Diane was devoted to her husband, content to move from place to place as his career progressed. They started their marriage in Nebraska, then moved to Washington State where they raised their four children. Finally, in her mid - seventies, they moved to Minnesota to live close to two of their sons. Due to friends moving, Diane had friends on both coasts as well as the mid-west whom she called frequently, and she and Jerry had traveled to Central America, China, Japan and Europe visiting their kids as they traveled the globe. Diane was a devout Catholic and had an intense interest in the well- being of children, poor people, immigrants, imprisoned people, and people suffering hardships. She actively volunteered in these areas of interest by helping school Spanish clubs, teaching English to Spanish- speaking adults, assisting at a residential hospice house, and volunteering for various church service projects. With her traveling autoharp, she brought music to nursing homes and adult day care centers. In several places she lived, she worked and volunteered at Head Start programs. She also loved to build community in the neighborhoods she lived in, hosting craft days for kids and adults alike, coordinating summer block parties, and gathering friends in driveways during Covid times. She was cherished by many, and is survived by her husband, Jerry Hansen, daughter Debbie (Vince) Yasaki, and sons Steve (Julia) Hansen, Greg (Bahi) Hansen, and Phil (partner Katie Marek) Hansen. She was a beloved grandmother to Caleb, Nicole, and Collin Yasaki; Camille, Rowan, Hans, and Molly Hansen; and David Morrell, III, Layson Morrell, and Mikal Hill. She was preceded in death by all of her birth family - father Harold Barrington, mother Helen, & sister Nancy. In lieu of flowers, Diane would prefer donations in her memory to be made to Catholic Relief Services, 228 W. Lexington St., Baltimore, MD, 21201. (crs.org) Funeral services will be held at 10:30 a.m. on Tuesday, Dec. 28, 2021, at Pax Christi Church, 12100 Pioneer Trail, Eden Prairie, MN. Viewings will be held at Washburn-McReavy's Dawn Valley Chapel (9940 Bush Lake Road, Bloomington, MN) from 4:00 to 6:00 p.m. on Monday, Dec. 27. Another viewing will be at the church at 9:30 a.m. before the funeral. Immediately after the funeral, a graveside service at Dawn Valley will occur. Everyone is invited to a light lunch at the Dawn Valley Chapel following the graveside service.

The family of Diane Barrington Hansen created this Life Tributes page to make it easy to share your memories.

Send flowers to the Hansen family.