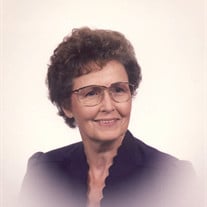 Louise Eldridge Spencer was born in Mobile, Alabama on September 11, 1924, the eldest of six children. She spent her early life in Quitman, Mississippi, where she developed a lifelong penchant for both hard work and artistic endeavors. As a young woman, she married Ralph McCarra, and they spent their early years together on an Army base in Abilene, Texas. They were blessed with 4 children. Over the next years, Louise was faced with raising the children by herself, working full-time as a dental assistant. She persevered with grace and fortitude, often putting her own dreams on hold. She taught Sunday school and was a member of the choir at Mont Rose Baptist Church. In the 1970s she moved to Gulfport, where she was finally able to pursue some long-delayed interests. She started a cake decorating business and made wedding cakes. She taught herself to paint. She opened her own arts and crafts store, teaching various classes in the shop on painting, decoupage, woodwork, and decorating. In the 1980s, she joined Mary Kay Cosmetics and eventually rose to become a top sales consultant, winning cars and diamonds - a dream realized for a woman who had seen so many lean years and hardships. In early 2000, Louise left the Gulf Coast and, defying convention, moved north - to Minneapolis, to be near her daughter. As she had in the South, Louise charmed everyone with her humor, sharp wit, and graceful demeanor. In Minnesota, she enjoyed designing and cultivating her yard, creating a stunning garden that overlooked the Mississippi River. She sang in local choirs. She decorated breathtaking cakes. Never wanting to be too far removed from an artistic scene, she volunteered at the Banfield Art Center in Fridley, and continued her own painting at home. She volunteered regularly with programs to help others. She was an active member of her church, and it was there she met and married pastor Robert Spencer. Never one to let age deter her, Louise learned to drive an 18-wheeler transfer truck when she was in her nineties. The remarkable episode was shown on local Minneapolis news and on CNN. Louise Spencer passed away peacefully on December 4, 2021, at the age of 97. She is survived by her children, Wanda McCarra of Fridley, MN; Terry McCarra of Biloxi, MS; Cheryl Fairchild of Fayetteville, GA; a brother, Grady Eldridge of Houston, MS.; five grandchildren: Brad, Dawn, Kevin, Matthew, and Joshua; and two great-grandchildren: Addison and Oscar. She is preceded in death by her son, Danny McCarra, her grandson, Brian, and her husband, Robert. In lieu of flowers, memorials preferred to Single Mothers Outreach: https://connect.clickandpledge.com/w/Organization/singlemothersoutreach/site/2016/campaign/SingleMothersOutreachInc11540/Donation/

Louise Eldridge Spencer was born in Mobile, Alabama on September 11, 1924, the eldest of six children. She spent her early life in Quitman, Mississippi, where she developed a lifelong penchant for both hard work and artistic endeavors. As a... View Obituary & Service Information

The family of Louise E. Spencer created this Life Tributes page to make it easy to share your memories.

Louise Eldridge Spencer was born in Mobile, Alabama on September...

Send flowers to the Spencer family.