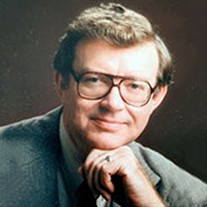 Schoen, Louis Stanley June 18, 1933 - March 23, 2022 Lou believed deeply, and worked tirelessly, for peace and justice, eternally motivated by his faith. He grew up in Valparaiso, NE supported by a strong family of faith. He graduated from college with a degree in Journalism and Political Science; interests that he maintained throughout his life. Lou worked in radio, tv, and public relations gaining his voice for advocacy and developing affirmative action programs. He participated in the civil rights movement, was a leader in the women's ordination movement in the Episcopal Church, and was actively engaged in local politics. Later in life, Lou earned his Master of Divinity in Religious Leadership and devoted himself to leading anti-racism work. Lou lived in St Louis Park for 54 years where he and Linnah, his wife of 52 years before she passed away, raised their three daughters, Linnah, Laura, and Dot. In addition to his wife, Lou was preceded in death by his parents Ed and Louise Schoen, and siblings Esther, Virginia, and Ken. Lou is survived by his younger brothers Leroy (Suzie) and Lester of Lincoln, NE; his three daughters Linnah Wallace Hahn (Mark) of Sydney, Australia, Laura Schoen Doughty (Patrick) of Ellensburg, WA and Dot Schoen Savage (David) of Bloomington, MN; his six grandchildren Pam (Gabe), Meghan (Brian), Kate (Kanda), Lizzie, AJ, and Danny; and his 4-week-old great-granddaughter Winnie, who brought a beautiful smile to his face when they met 3 days before he died. Lou's Memorial Service was held Saturday March 26 at St Mark's Episcopal Cathedral in Minneapolis. Please consider making a donation, in Lou's name, to the organization through which you knew him, or to the PBS News Hour (his daily companion) at pbs.org/newshour/... .

Schoen, Louis Stanley June 18, 1933 - March 23, 2022 Lou believed deeply, and worked tirelessly, for peace and justice, eternally motivated by his faith. He grew up in Valparaiso, NE supported by a strong family of faith. He graduated from college... View Obituary & Service Information

The family of Louis Stanley Schoen created this Life Tributes page to make it easy to share your memories.

Send flowers to the Schoen family.