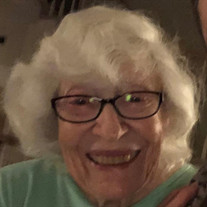 Lorraine Robell Sherman, age 92 of St. Louis Park, passed away December 13, 2021. She was born on April 9, 1929 in Brooklyn, New York to Sarah Rachel and Samuel Robell. As a first generation American she learned to be resilient, independent and inventive, and was helping her parents complete their tax returns (accurately) as a 12 year old. She attended Vassar College on a merit scholarship at age 16, majoring in chemistry and was elected to Phi Beta Kappa based on her exceptional academic performance. Lorraine decided to move to Minneapolis to attend graduate school at the renowned University of Minnesota Department of Chemistry where she met her future husband, Morris H. Sherman, at a Hillel Chanukah party. She married Morris in 1952, completed her master's degree and taught chemistry part-time at the college and high school levels while raising her three young children. She was tragically widowed at age 38 when Morris died unexpectedly in 1968, and as a single mother supported her three children by returning to full-time teaching at Cooper High School in Robbinsdale. At age 48, Lorraine charged ahead to graduate with a law degree from William-Mitchell College of Law while continuing to work full time. She passed the MN bar and the U.S. patent bar in 1979 and became one of the first female patent attorneys at 3M in St. Paul where she had a storied career for over 20 years. In 1978, she married Sidney Schwartzfield, also an attorney, who became her companion and life partner for 41 years. After retiring from 3M, she began spending half the year in San Diego, where she loved the sunshine, warm weather, and endless opportunities for daily walks. Lorraine was a member of Adath Jeshurun Synagogue for six decades, served on the board of the Talmud Torah of Minneapolis, was an avid pianist, feminist and an active member of the League of Women Voters. She is survived by her sister, Nora Robell, children Cynthia (married to Allan Schuster), Norman (married to Mitzi Dunau), and David (married to Carey), eight grandchildren and three great-grand children. Funeral service at Adath Jeshurun, 10500 Hillside Lane, Minnetonka on Thursday, December 16 at 1:00 PM and virtually. (Please email [email protected] for the registration and live streaming links.) Shiva at Adath on Tue/Wed at 7:00 pm. Washburn-McReavy.com Edina Chapel 952-920-3996

Lorraine Robell Sherman, age 92 of St. Louis Park, passed away December 13, 2021. She was born on April 9, 1929 in Brooklyn, New York to Sarah Rachel and Samuel Robell. As a first generation American she learned to be resilient, independent... View Obituary & Service Information

The family of Lorraine Robell Sherman created this Life Tributes page to make it easy to share your memories.

Send flowers to the Sherman family.